Coldplay bring Eno onboard and channel their inner U2 resulting in a magnificent record... 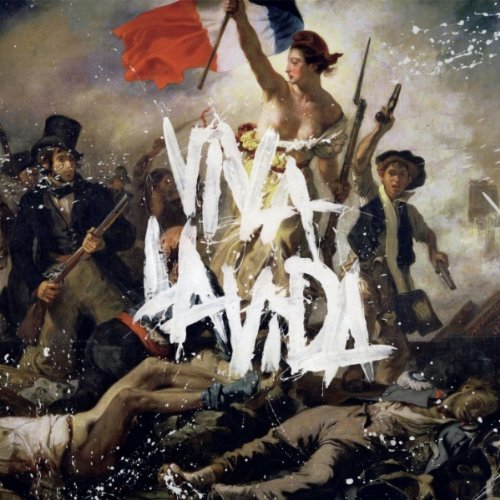 I've joked with friends and co-workers that Viva La Vida is either the first U2 record we're going to hear this year or the best U2 record we're going to hear this year.  Many critics thought Coldplay had Radiohead ambitions when they first hit the scene, but it's been increasingly clear over the past several years that Chris Martin has Bono envy.  Coldplay took another step towards emulating their heroes by hiring the legendary Brian Eno – U2 co-conspirator being only one of his many brilliant accomplishments — to produce their new album.

I groaned when I first learned of this.  I like Coldplay (not the coolest thing to admit) but I've been on board since Parachutes.  I have nothing but the utmost respect for Eno but feared this was going to be a step in the wrong direction.  I wanted the band to change up after X&Y — their weakest album — but blatantly copping U2 seemed to me the wrong path, and that's how I prejudged this collaboration.

To quote Steven Tyler, I got the right key but the wrong keyhole.  While I'm likely in the minority in thinking of X&Y as a misstep, I was afraid that teaming with Eno would result in an overly earnest, defiantly anthemic over-correction.  The execution makes the idea work even if it seemed questionable to me at the time.

Martin's lyrics make references to all manner of spiritual themes.  God, Jerusalem, St. Peter, Death and All of His Friends- they're all name-checked.  Martin seems to be growing up.  On Viva, he is interested in a world larger than his own.

Maybe Martin is a happier, more stable person.  Maybe he knows he'll get crucified if he tries writing a self-denigrating, moping record about not getting the girl when he's married to Gwyneth Paltrow and has two beautiful, healthy children.  Maybe he just started reading better books.  The songs on Viva rely more on texture than traditional structure and favor ambiance over melody.  While the whole thing is over in 47 minutes, many of the songs have sequels, segues, and multiple parts; it's like old school Metallica at about 1/8 the speed.

The U2 influences begin early.  The instrumental "Life in Technicolor" feels like The Edge's guitar intro to "Where The Streets Have No Name," with "Cemeteries" feeling like the song proper.  You'd swear The Edge is singing backing vocals on the fantastic "Cemeteries of London."  The two pieces don't add up to the equal "Streets" but this is a fantastic way to open the album.

"42" begins like Parachutes­-era Coldplay, one of the few pieces of music pairing Martin's falsetto with a piano, but that's not where it ends.  The melancholy dirge plods as additional instruments are slowly introduced and then a swell of strings and synthesizers abruptly divert it in an unexpected direction.  "Lovers in Japan/Reign Of Love" works in just the opposite direction, with "Lovers" playing like an update of vintage Simple Minds, an almost anthem that never fully takes flight before giving way to the gentle "Reign of Love."

"Yes" is another of these hybrid tracks.  I'm sure this makes sense to the band, but I don't see how these two distinct movements are related.  There is a mysterious, almost sinister feel to the opening as Martin sings in his lower register – a rarity from him – against a backdrop of swirling, exotic strings.  The vaporous second movement is sonically interesting but the elliptical sequence of the record starts to wear thin.

Fortunately "Viva La Vida," the catchiest song on the record, follows.  "Viva" gives a strong nod to the Doves' "Pounding."  Although the bounce is a slow one, "Viva" is augmented by a soaring string arrangement.  While "Viva" is catchier, "Violet Hill" feels more like a proper single.  "Strawberry Swing" isn't as strong, but this trio is the only sequence where the album feels conventional; it's song, followed by song, followed by song.

"Death And All His Friends" encapsulates the record and brings it full circle.  The understated intro segues into arguably the most anthemic moment on the record and ends with a reprise of "Life in Technicolor."  It's a masterful achievement.  Images of flickering cellphones dance in my head when I listen to Martin's layered vocals repeat the refrain "No I don't want to battle from beginning to end/I don't want a cycle of recycled revenge/I don't want to follow Death and all of his friends."  Brilliant.

The disappointment of X&Y made me wonder if I'd ever look forward to another Coldplay record, and Viva La Vida has answered that question by restoring my faith in the band.  I miss some of the memorable melodies that were crucial to their earlier success, but the rich textures of Viva are nearly as rewarding if not quite as immediate.