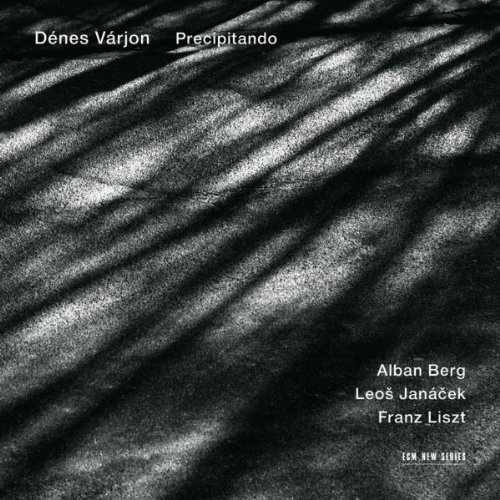 Last October 22 was the 200th anniversary of the brilliant composer Franz Liszt’s birth. The new ECM release Precipitando by pianist Denes Varjon is something of a tribute to Liszt, and features an incredible interpretation of the composer’s “Sonata in b-minor.” The piece is considered Liszt’s crowning achievement, and the beautiful piano of Varjon certainly does it justice. The sound of the instrument alone is so crisp and clear, yet it is Varjon’s playing which makes the piece truly come alive.

Denes Varjon’s affiliation with Liszt stretches back at least 1984, when he attended the Fernc Liszt Academy of Music in Budapest. He has performed with major orchestras such as the Camerata Salzburg, the Academy of St. Martin in the Fields, the Wiener Kammerorchester, the Franz Liszt Chamber Orchestra Budapest, the Camerata Bern, the Hungarian State Symphony, Gidon Kremer’s Kremerata Baltica, and many others.

It may have been Kremer who first brought Denes Varjon to Manfred Eicher’s attention, although I am not certain of that. In any event, Varjon’s music certainly fits in with the ECM New Series ethos.

One of the factors which make Precipitando so intriguing are the accompanying pieces Varjon chose for the disc. As Varjon himself puts it, “It is always highly interesting to find connections between composers, and bridges between epochs in musical history. In the mirror of other composers and periods, I begin to see new dimensions of works which I have performed, and this is especially the case when I play pieces by Liszt.”

The two additional compositions Varjon has included are Alban Berg’s “Sonata op. 1” and Leos Janacek’s “In The Mists.” It is fascinating to listen to these prior to the 31:10 “Sonata in b-minor” as one definitely sees the connections Varjon mentions in his quote. I particularly enjoyed the four-part “In The Mists,” although Berg’s “Sonata” is also quite compelling.

I have never been disappointed by anything I have heard on the ECM New Series imprint, and Denes Varjon’s Precipitando is no exception. It is an excellent disc on a multitude of levels, and well worth checking out.