An idiosyncratic man makes a vintage West Side blues record... 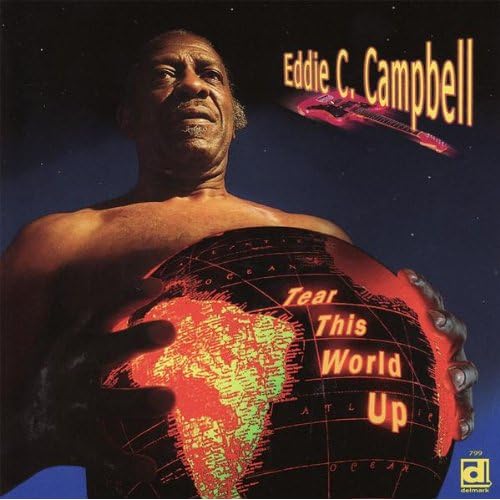 Eddie C. Campbell waited a long time to begin his solo career. The 70-year old native of Mississippi started playing guitar when he was young and spent years banging around Chicago playing with the A-list talent like Howlin' Wolf, Magic Sam, Koko Taylor and a host of others. He didn't record his first solo album until 1977, not long after Taylor brought him to the attention of Willie Dixon.

When I wrote about Tinsley Ellis I talked about the nebulous point where blues become rock. It's something Eddie C. Campbell has thought about as well. On the back of his Tear This World Up CD, he says, "Not too many people can play it," referring to his style of blues. "A lot try, but then they get mad and change into Jimi Hendrix."

Tear This World Up is no Jimi Hendrix record. This is a blues record with firm roots in the traditional sounds of Chicago. It's great to be able to listen to classic records made by legendary names who helped define these idioms. That music deserves to be preserved and honored and remembered, but if new generations of artists don't study, learn and adopt the lessons of those traditions they eventually become extinct. Listen to Tear This World Up and you'll quickly understand this is not Campbell's history paper or a science experiment. The music that flows through him, captured on this record by Dick Shurman, lives in him because it's what he grew up listening to and playing. It's what he learned from some of the great names he worked with before he began his career as a solo artist and it's records like this that will inspire new generations to learn that tradition and pass it forward.

That sense of past and present is never more evident than when he records a loving tribute to his longtime musical companion, Magic Sam. He begins “Easy Baby” by paying tribute to the late bandleader and one of the pioneers of what is known as the West Side sound. Campbell puts his own stamp on the song but this is still a textbook example of West Side blues. David “Honeyboy” Edwards, one of the greatest Delta bluesmen, described listening to guitarists who inspired him and the beautiful chords they could play. Campbell's “Easy Baby” solo blends some beautiful chords with single-string leads that alternately ring and sting.

It's that ringing sound in his playing that is at the center of his identity, and Shurman's open production and the arrangements allow the ringing, echoing guitars to drench the song as organs shimmer and horns punctuate as the bass hits hard and low, rumbling and deep. This blend is the secret ingredient to highlights like “Makin' Popcorn,” “My Last Affair,” the instrumental “It's So Easy,” and “Summertime.”

Campbell opens his interpretation of Gershwin's “Summertime” with a guitar figure that sounds like it came fresh off a White Stripes' record. We all know Jack White is a serious student of the blues, pointing to Son House as one of his important influences. The intro sounds similar to White's work on “I Think I Smell A Rat” from White Blood Cells.  As the song progresses, Campbell takes a few more tasty turns with guitar. My favorite is the intro, but what he does at the end is also really interesting. Actually, this song is a great piece of guitar work because Campbell shows his versatility. What you hear at the beginning is different from the solo he takes midway through the song and ends with some sweet chording. He blends distinct guitar personas in the same song — a cover of a well-known song not associated with the blues. On “Summertime,” he stretches the bonds of the traditional blues without bursting them. That takes some real creativity.

Creativity is something Campbell has plenty of and it manifests itself in numerous ways. It's not often you hear someone merge traditional and unconventional in the blues but his idiosyncrasies and sense of humor surface as well. The impact of that is mixed. There are times it loosens things up and makes for a good time and there are times it's more distracting than fun.