A triumph from beginning to end... 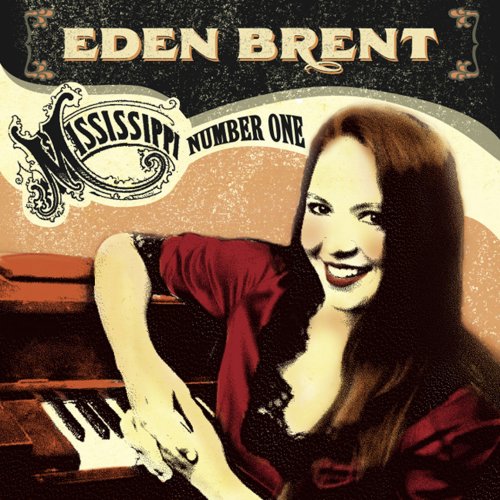 One doesn't need to unwrap Mississippi Number One, Eden Brent's first record for Yellow Dog Records, to know this is an album filled with vintage sounds. Talk of opening a jewel case makes me feel vintage, too.  The cover art for M#1 reminds us there was a time when CDs were the young whippersnappers and vinyl was the established veteran medium of music buyers.  That the album artwork arrangement would feature a photo that looks yellowed with age suggests something about intent.

The opening sounds of opener "Mississippi Flatland Blues" provide evidence there has been no bait-and-switch.  The photo may have been doctored with Photoshop and aged artificially but the music hasn't.   This isn't ProTools blues.  The words describe modern living but these are those same old blues, wrapping their loving arms around you in the form of Eden Brent's warm voice and hot piano playing.

The gentle rollick of "Mississippi Flatland Blues" is an aural slice of the South.  Brent's voice and delivery and the imagery in the lyrics invite listeners to travel to a different place, musically and geographically.  Her playing has the bluesy fills that evoke those seemingly invented by the legendary Otis Spann (although lacking his brute force), but also the chorded sensibilities and quick runs of a jazz pianist.

Brent sounds like she spent a few years listening to old Aretha Franklin records in her bedroom on "He'll Do The Same Thing To You."  There is a hint of R&B and soul, and the bass pops with the feel of a modern electric jazz player.  "Darkness on the Delta" blends a lounge vocal with the kind of ragtime piano sound people used to listen to in their parlor, back when families had houses with rooms they called "parlors."

"Love Me 'Til Dawn" is a classy, classic ballad with a distinct '40s or '50s feel, highlighted by Brent's warm, husky croon.  The lack of diva theatrics makes this warm, inviting, and alluring.  "Afraid to Let Go" is a slice of sophisticated jazz pop.  She covers the Gershwin tune "The Man I Love" (just saying that makes me want to watch The Fisher King), one of several covers she mixes with her own compositions.

The album closes with "Until I Die," a song that opens with so many elements of classic Carole King – the vocal and arrangement in particular – that morphs into a gospel production.  "Until I Die" does what any great closing song should do.  It makes you want to start the album all over again while still providing a satisfying sense of closure.

The mix of blues, jazz, soul, R&B, and pop is well executed.  These differing elements work because so many of them draw from the same roots, and roots are a huge part of what this album is all about.  It's a real feat to be this free and easy without and to be a history lesson and road map of American music without being stiff or dry.  From beginning to end, Mississippi Number One is a triumph.