Review: Epitaph - Outside The Law 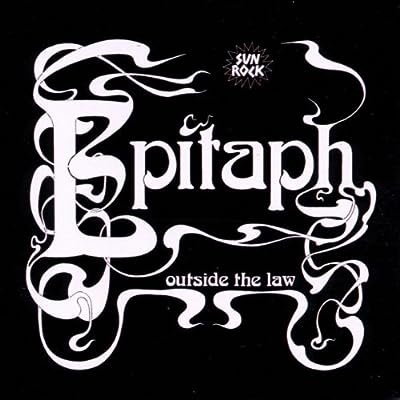 Epitaph were a four-piece German rock band of the early seventies. While this places them in the stellar company of the Krautrock contingent, their music actually had very little in common with that of bands such as Can or Neu! Epitaph were a lot closer to what Rory Gallagher once termed “meat and potatoes” rock.

Epitaph’s 1974 release Outside The Law was their third effort, and undoubtedly their shining moment. If it were not for persistent management troubles, the group would have had a very real shot at cracking the US market. In fact, none other than Irving Azoff expressed an interest in guiding their career. Language barriers (among other factors) derailed this course of action though.

Business troubles aside, Outside The Law is a convincing album. Much like their German contemporaries the Scorpions, Epitaph realized early on that they would need to write their songs in English if they had any hope of making the big time. Overall, the record is a mix of basic blooze, with some Southern rock touches. The group leave plenty of room for guitar solos, courtesy of Cliff Jackson and Klaus Walz - who take ample advantage during songs such as the title track.

“Tequila Shuffle” begins with some electric mud straight out of the ZZ Top songbook. With the dueling guitar ending, the tune would have fit in perfectly in a set opening for the likes of Ted Nugent or Kansas. As was seemingly mandatory at the time, the album concludes with an extended magnum opus; “Fresh Air.” You gotta love it when a band take four minutes just to find the basic riff. To their credit, when Epitaph lock into the groove, they never let it go. Nine minutes fly right by, with the proper stimulants of course.

Epitaph disbanded after this one, which has been issued for the first time on CD by the MIG label. They have included a decent selection of bonus tracks to make the package more enticing. Three of these were recorded in 1976 for their proposed fourth LP, which never saw the light of day.

The four remaining cuts hail from a reunion concert which took place in 2000. Three of the these hail from Outside The Law: “Woman,” “Outside The Law,” and “Big City.” The highlight though is “Jim’s Thing - Drum Solo.” Three minutes of Ger-maniacal skin-pounding is just the thing for those of us who have been sadly deprived of such bong-worthy concert events these days.

Epitaph’s Outside The Law is a worthy platter of what we used to call “hard rock,” and a welcome blast from the past.