A predictably lovely performance from Florence + The Machine... 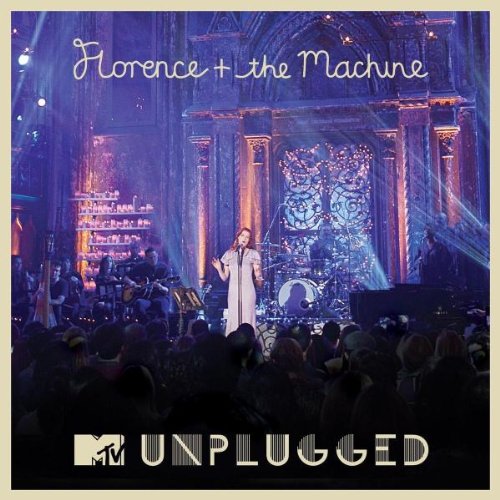 Am I the only one who never got the memo MTV was still airing Unplugged? First Beavis & Butt-Head returns and now Unlugged. What's next? Videos?

I had mixed feelings about a Florence + The Machine Unplugged performance. I've seen her perform live and know these mighty studio creations do translate in a live setting but could they work unplugged?

On the one hand it made perfect sense as Florence has an amazing, ethereal voice and even after only two albums plenty of ballads that could showcase her powerful vocals. Her catalog also includes some beat-heavy singles that would seem odd choices for an unplugged performance unless there was an army of musicians on stage to compensate for what computers and keyboards did on record.

I had no reservations about buying the CD/DVD but wasn't sure how it would hit me. It turns out to be pretty much what I expected and that's (mostly) a good thing. The set list includes a good mix of songs from her debut Lungs and Ceremonials, slightly favoring the latter and also mixes in a pair of covers.

She is backed by a pianist, guitarist, bass, harp (not harmonica, blues fans) and drums- pretty much the standard Machine configuration with a string section and small gospel choir of backing vocalists added to the mix. The removal of the digital processing and production isn't much of a sacrifice as these musicians ably create lush, evocative atmosphere for Welch's enchanting voice. She sparkles and dazzles, passionately interpreting her material, especially "Never Let Me Go," and giving a lovely performance of Otis Redding's classic "Try A Little Tenderness."

The ballads aren't the only thing that work well as "Dog Days Are Over," "Shake It Out," and "Drumming Song", three of my favorites, sound great as well.

If there is a knock on Unplugged, it's the problem of too much of a good thing. I love this intimate performance but unfortunately too many of these songs are the same kind of intimate in tempo and tone. Welch alters her vocal approach but not often enough and you can hear her holding back even when she reaches for something extra, like a boxer who just can't let his hands go.

That quibble aside, I remain an enthusiastic and unapologetic Florence + The Machine fan. I love her voice and there are subtleties to be discovered in the songs as presented on Unplugged. This isn't the starting place for the uninitiated but the faithful shouldn't hesitate.