One of the great living singers returns with her first record in eight years... 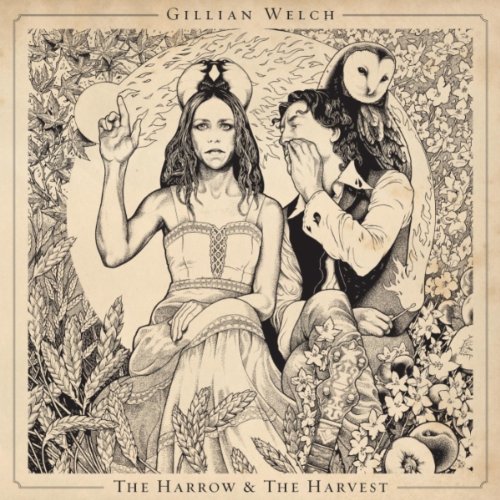 I love records that evoke time and place; something Gillian Welch's best records do with ease. The Harrow & The Harvest is the first record under her name since 2003 and it's clear nothing has changed within the first few bars of "Scarlet Town," and we should all thank the stars above for that.

There's been a mini folk revival in the past couple years and some nice records have emerged as a result but most of them can't hold a candle to the many high-water moments of Welch's career. She's been doing this longer and knows a few tricks they don't. She also has two secret weapons at her disposal. The first is her longtime companion David Rawlins, an accomplished musician, songwriter, and brilliant harmony vocalist. The second, and greatest, is her voice. Gillian Welch is playing chess and everyone else – folkie or otherwise – is playing checkers. You can hand her and another singer the same song and accompanying music and she's going to win every time. She doesn't do it with range or melisma but with a gentle authenticity that lends credibility to ordinary songs and creates timeless art with great ones.

The Harrow & The Harvest has a couple ordinary moments and there aren't any songs that reach to the heights of greatness the likes of what Welch has done in the past, but there are brilliant moments that come damn close.

The first half of Harrow is better than the second with songs like "Scarlet Town" and "Dark Turn Of Mind." "Scarlet" is the better musically with "Dark Turn Of Mind" boasting better lyrics. Both are excellent. "The Way It Will Be" is the first of a set of songs on the record that built clichéd, obvious phrasing. "The Way It Will Be" is compelling in spite of the empty refrain, saved by some better phrasing in the verses and another great vocal. "The Way It Goes" is solid but lacking and "The Way The Whole Thing Ends" is an underwhelming end to an otherwise strong record.

Those first three tracks may be my favorite but the masterpiece of the record is "Tennessee." The verses create a brilliant character sketch filled with skillful phrasing and empathy. The chorus, if you can call it that, isn't quite up to the same standard. It's well sung and fits the picture being etched in the song but just isn't as strong as some of the other passages in the verses. Taken as a whole, it's a masterful piece of songwriting and is flawlessly executed by Welch and Rawlins.

The Harrow & The Harvest is antique music and vintage Gillian Welch. The highpoints are plentiful and the lesser moments are still worthy of repeated listens. It's good to have her back. Let's hope she doesn't take another eight-year hiatus.