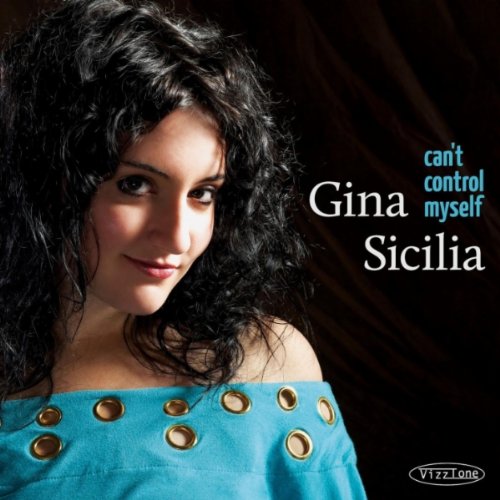 Do yourselves a favor when you buy Gina Sicilia's Can't Control Myself: skip immediately to track two and listen through to the end of the album. It may take you awhile to hear the rest of the disc if you start at the beginning. It did me. It's taking every ounce of self-control not to riff on the fact that first song is called "Addicted" but that's pretty much what happened.

There's a swanky, honky tonk vibe to the tune courtesy of some great tenor sax from Matt Cowan and a bed of guitars laid down by Dave Gross that feel simultaneously abrasive and muted. Sicilia's vocal has a touch of drawl but the Philadelphia native isn't hamming anything up, trying to sound Nashville. There is nothing false here; it all feels completely natural. She opens her mouth and the song pours from her.

Can't Control Myself is the third album from 25-year old Sicilia and while it is billed as a solo album, there is a musical partnership at work here. She is the spirit, bringing the voice and seven of the songs; Dave Gross is the architect, producing the album and playing nearly every instrument. Their flourishing musical partnership has given birth to a record with a clear vision without novelty or excess, clocking at a lean 10 songs and 38 minutes.

Gross' music beds and arrangements are diverse yet unified and play to Sicilia's vocal strengths, brewing a musical potion of blues, R&B, soul, and classic pop. Her confidence as a vocalist can be heard in the restraint she shows; she doesn't shout the blues nor does she oversing or overreach. Her voice is rich and warm on its own whether interpreting others' material or her own.

"Gimme A Simple Song" is an excellent workout for both she and Gross, who layers guitars and dashes off a stylish solo over a bed of Wurlitzer and B3 organ. "Wish The Clock Would Stop" works in just a hint of tropical island sound in the strums from Gross with spicy trumpet accents from Jon-Erik Kellso.

Those are two strong cuts on a record with no weak spots but neither of them nor any of the other tracks capture the magic of "Addicted," but that should be interpreted as a complement for a fantastic song rather than an indictment of the rest of the record. There are far worse things than having a record with nine consistent, well-executed songs and one knockout.