Glen Phillips throws out his own rulebook... 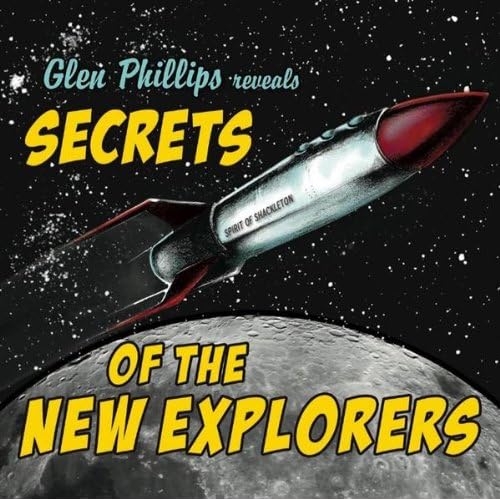 I've got a very serious cynical streak that runs through me and that mindset has turned words like "diversity" into code for some of the sillier sides of political correctness. In the past few days I've realized that's not entirely good because diversity can be a powerful tool for perspective, something society, our culture, and I desperately need.

If you get your news exclusively or primarily from some sources, you get the false sense that musicians lead charmed lives that revolve around big houses, fast cars, faster women, and good drugs. If you turn to other sources, you'll be led to believe musicians live in an artificial, infantile Neverland where personal responsibility is a punchline and talented people throw their money and talent away and flush their lives down the toilet. In short — and I can't believe I'm quoting Kiss here — the music world becomes a world without heroes.

Enter perspective. Since starting my BlogTalkRadio program the B-Sides Concept Album, I've had the opportunity to hear about a different world. I've heard the tales of real, working musicians who are far removed from the caricatures and character assassinations popularized by some media portals. There are musicians who love their wives and raise their children and wonder if they'll be able to follow their muse and put food on the table. In short, there are good guys in this game and some of them are normal people. Maybe this is news only to me, but I'm willing to bet I'm not the only person who has been led down a narrow-minded path by the power and influence of Big Media.

I interviewed Glen Phillips last week on my program and the experience has impacted me. It was fascinating to hear real-life tales from a real musician rather than the cartoon-ish ones that are more famously and lucratively recycled. It was striking to listen to someone who has seen the music industry from some many different perspectives go through the struggles of understanding his place in it and making peace with that. This is a guy who is doing his thing a long way from the spotlight and he's doing it for all the right reasons in a world where evil is funny and morality is a joke. There are talented pricks and kind hacks and when it comes to music I look for the talent first. This happens to be one of those glorious opportunities to support someone possessed of talent and kindness.

Great music stands on its own and it doesn't need explanations and storyboards. You don't have to know about its creator to appreciate it, but any music worth discussing will be marked with the artifacts of its creator because great music is personal. Personal doesn't have to mean awkward, naked confessionals. It can come in the form of a connection that is felt. I'm sure it's been done because we can be fooled, but faking that kind of connection can't be easy. Secrets of the New Explorers, Phillips' new EP, is imbued with a light because of the intentions behind its genesis. That Phillips told me directly about those intentions helps me to appreciate them in a little more detail, but I could have heard them even if I hadn't talked to him.

Secrets is a collection of songs born of fun. It was created out of a desire to try something different. It was created to please its creator, and that joy is translated through the music.

"It's the reason the word is 'play' when you're talking about working with instruments," said Phillips. "It should be play."

How can a talented artist make a bad record when they approach it like that? It may be possible to screw an album up even under those circumstances, but you won't find that on Secrets of the New Explorers. Musically, he is stretching himself and embracing sounds and approaches not prevalent in his previous work. Noel Gallagher once said that musicians are a product of their record collection. Secrets reveals another side of Phillips' record collection.

There are still acoustic guitars, earnest lyrics, and great vocals delivered by a pure voice. On Secrets, these elements are blended with ambient sonic textures and electronic elements not heard on Phillips' previous solo records or those he made with Toad The Wet Sprocket. In that way, the experimentation is a success because these new sounds don't replace what he does well, they supplement it. "They'll Find Me" and "Solar Flare" would sound great live as a solo acoustic pieces and would be no less engaging if they were recorded in the stripped-down approach of previous albums like Abulum and Mr. Lemons, but the otherworldly sounds deepen the emotion and add color to the lyrics. Vocals are tampered with, some double-tracked and others cloaked with effects.

The North Pole has been the subject of many a song, but the South Pole has been largely left out in the cold (I couldn't resist), until now. Okay, "The Spirit of Shackleton" isn't about the South Pole, per se, but Ernest Shackleton did lead expeditions of the South Pole and his spirit has lent his name to the song. I've heard bad pop songs dressed up with some of these sounds before, and this is what it sounds like when a good song gets to try them on. There is no classic singalong chorus or obvious pop hook, but the loneliness and disconnection in the lyrics and vocal are a great contrast for the shiny synth sounds and off-kilter, electronic percussion. All of these disparate elements — historical figures, far away places, shiny coatings and sad vocals — are blended wonderfully.

This might be my new subversive way to turn people on to the cause because I'd bet all the money in my pocket that almost no one I know would know this is a Glen Phillips song. I also bet some dickless radio consultant goobs out there could find a place for this song on radio if they sat down and listened to it. It joins "Consolers of the Lonely" (Raconteurs) and "So He Won't Break" (Black Keys) in my contest for Song of The Year.

Secrets Of The New Explorers can be purchased through Phillips' web site, GlenPhillips.com. The EP is available as a CD or electronically (FLAC and MP3).