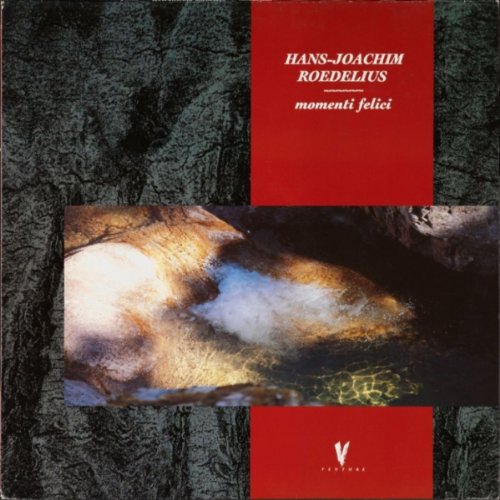 By the time of 1987's Momenti Felici, Krautrock legend Hans-Joachim Roedelius had been recording in a solo environment for many years. When he split off from Cluster partner Dieter Moebius in the late seventies after their groundbreaking work with Brian Eno in Harmonia, Roedelius pursued a similar musical style, but in a manner all his own. The Selbsportrait series was a particular example of this. While continuing to utilize electronics, his music became much more personal and reflective. Perhaps the most telling example of this approach was the 24-minute "Hommage A Forst" from The Diary Of The Unforgotten - Selbsportrait VI.

For those of us who follow the incredibly prolific artist, his return to the acoustic sounds of the grand piano was a welcome change. As an artist who had been at the forefront of German experimental music from the very start, whatever choices he made were closely followed by his peers and acolytes. With Momenti Felici, Roedelius made a definate left turn, and came up with a recording that delightfully confounded his critics.

The most telling of the additions to the Roedelius sound on Momenti Felici is the judicious use of Alexander Czjzek's saxophone. There are moments on the album make it sound as if it is a jazz record. Roedelius' music has always defied easy categorization, but it has never been confused with such standard fare as jazz. Of course there is nothing "standard" about anything Roedelius does, and this is no exception. The one track that is the most jazz-inflected is titled ""Guten Morgen," and on it, Roedelius allows Czjzek plenty of space. It is a definite highlight of this 12-song set.

Other highlights include "Uber Den Wolken," "Am Weiher," and "Leicht Zu Fub." Do not be put off by the German titles, all of this music is complety instrumental, so no translation is necessary. What Roedelius manages with these three tracks in particular is to evoke a very calming, soothing musical tableaux. It is a direction he had been steadily moving toward after the sometimes wild excesses of Kluster/Cluster in the early seventies, and his use of grand piano to express himself here is most welcome. There are still remnants of his work with the Mobius/Brian Eno collaboration Harmonia as well. I hear this to a large degree in both "Capriccio" and especially the opening track "Im Frutau" The latter piece also utilizes synthesizer to great effect. In fashioning an accompaniment for his piano recitation, Roedelius' synth takes on the tones of a violin, resulting in a very winning combination.

This Bureau B re-release of Momenti Felici also includes three previously unreleased tracks on the CD. As has been the case with many of the other Bureau B Rodelius projects in this series, I find these bonus tracks to be as compelling (if not more so) than the ones that made the original cut. "Auf Dem Markt," "Vor Ohren," and "Molldau" are each outstanding in their own way. The strange, almost country-ish groove of "Vor Ohren" is as odd a direction for Roedelius as anthing I have ever heard by him.

Hans-Joachim Roedelius was working in an extremely personal and reflective mode by the time of Momenti Felici. The album is recommended for fans of piano music, and most especially for those who wish to hear what one of the Krautrock pioneers was up to after the experimental furor had died down. A very tasty encounter.