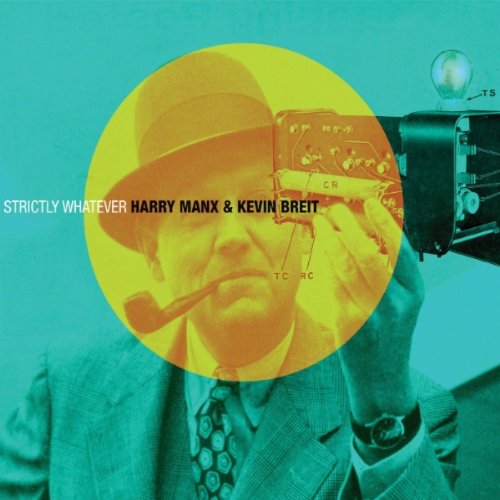 It took nearly four years, but Harry Manx and Kevin Breit have followed up their 2007 effort In Good We Trust with Strictly Whatever, an album heavy on originals playing to their strengths as songwriters and guitarists.

"Looking For A Brand New World" was included in Stony Plain's 35th Anniversary collection, demonstrating the label not only has an impressive past but has a bright present that gives hope for the future. There's a strong feel of sunny, '70s California pop in this duet. There's optimism in the lyrics and the chirpy guitars accent that.

"Sunny" is a Manx-sung song that recalls more of that '70s softness, blending some tasty guitar work with the folk/pop sound at the heart of the great singer/songwriters of that era like James Taylor and Jackson Browne.

Manx adapts Mary Elizabeth Frye's poem for "Do Not Stand At My Grave And Weep," giving the record one of its more traditional blues moments. It's still a roots-based singer/songwriter construction but the somberness of the lyrics allow the men to explore the blues with some distorted harp and great slide guitar accents.

The instrumental "Hippy Trippy" leaves the '70s fixation behind and allows these two instrumentalists to pay tribute to the psychedelic sounds of the '60s. In addition to both being capable guitarists, they play a number of stringed instruments on the album. Electric sitar adds swirling sonic color to evoke those now-classic sounds.

Strictly Whatever is a skillfully crafted album that relies on subtle interplay between two accomplished musicians. Some songs are more memorable than others but the record as a whole is the work of professional craftsman and is nothing less than pure pleasure.