Review: Hubert Sumlin - About Them Shoes 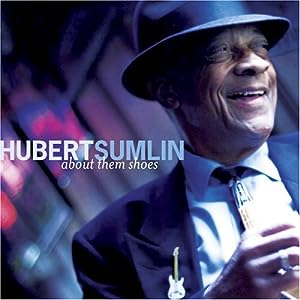 Hubert Sumlin's most famous - and some might argue most significant contribution to the world of music and the blues is his guitar work for Howlin' Wolf in the '60s and '70s.  Wolf was one of the most successful, important, and influential bluesmen of what is considered the Chicago Blues sound.  The man's own voice, a sound that cannot be well described in any words I know, is the most memorable ingredient in Wolf's best songs with Sumlin's lead work coming in a close second.  Anyone spending much time listening to those great sides, most of which were cut for Chess Records, should be able to recall some of that stylish fretwork.

Sumlin's latest solo album, About Them Shoes, won Traditional Album of the Year at the Blues Music Awards and he was named guitarist of the year.  12 of the album's 13 tracks were written by either Willie Dixon or Muddy Waters with Sumlin penning the other.  That he would perform several Dixon tracks is notable only because of the high quality of his songwriting.  Dixon has written some of the most famous songs in blues and rock history.   He recorded many of them while in Howlin' Wolf's band and those songs became blues standards and in some instances actual hits.  His decision to perform so many of Waters' songs is fascinating because Waters was The Wolf's chief rival during their heyday at Chess.

With Sumlin handling lead guitar duties on all 13 tracks, all that is left is to find a couple fellas to round out the band and help with vocals.  Apparently Sumlin, in addition to being a fabulous guitarist, is in possession of one of the great Rolodexes of all time (Rolodex... look it up, kids).  Joining Sumlin on About Them Shoes is Eric Clapton (guitar and vocals), Keith Richards (guitar, bass,  and vocals), Levon Helm (drums), James Cotton (harmonica), Bob Margolin (guitar), Paul Oscher (harmonica and vocals), and Blondie Chaplin (vocals and percussion).  Is that any good?

Perhaps more remarkable than the cast is how cohesive About Them Shoes sounds with eight different vocalists and so many musicians.  It does occasionally feel disjointed with all of those voices but the playing of Sumlin and his musical companions holds it all together.

The album opens with Eric Clapton taking lead vocal and second guitar duties on a cover of "I'm Ready."  This is a song that leaves huge shoes to fill, even for an artist of Clapton's stature (Waters recorded multiple classic versions) and he is mostly up to the challenge.  The differences between their version and those of Waters (and the scores of others who have performed this song) are found in the subtleties.  Waters' versions (in particular his vocal) is still superior but the version on About Them Shoes is not far behind.  Clapton's voice has more bite than it has in over a decade.  It is hard to believe such a venerable song being performed by venerable artists can sound this alive.

Speaking of venerable, Keith Richards takes lead on the following song, "Still a Fool."  The song moves at a grinding pace with little more than an insistent bass drum and minimalist bass anchoring the song.  The understated rhythm leaves plenty of room for Sumlin and Richards' guitars to circle, stalk, and snarl at one another.

The song selection could be a bit of a disappointment for some.  After all, "I'm Ready" and "I Love the Life I Live, I Live the Life I Love" have been recorded 924 times each (at least!).  Is there anything left to be learned from these songs?  Do they have any room for further discovery?  Sumlin & Co. were wise not to try reinventing them with outrageous arrangements in an attempt to be original.  These are covers of famous songs, people enjoy hearing them performed well, and About Them Shoes delivers just that.

About Them Shoes is not gut wrenching, tortured soul blues.  None of the vocalists on this album have the frightening intensity of the Wolf or the deep resonance of Muddy Waters.  About Them Shoes is not a party album, either.  Toes will tap but they will do so while attached to bodies sitting on sofas.  This is a whiskey-sipping album, not a beer-guzzling one.

Sumlin takes on the role of a victorious commander reliving his greatest conquests by taking one more spin around the field of battle.  It was more exciting the first time when the fires burned hotter and danger hung in the air but this old general still remembers where the bodies are buried.  It might not be the same, touring the battlefield after the fact and from a safe distance, but it is still a hell of a lot of fun.