Review: Irma Thomas - After The Rain

There are a lot of people who associate U2's All That You Can't Leave Behind with 9/11.  The anthems, the themes, and some of the lyrics seem to speak perfectly to the aftermath of that terrible day in our nation's history.  That 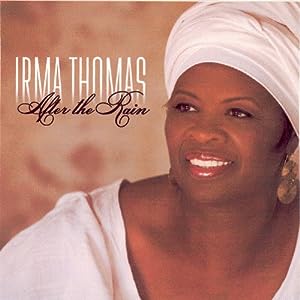 connection is further cemented by the way they rose to the occasion.  No American band on the scene was capable of the galvanizing performance U2 gave at the Super Bowl that followed a few months later.  When America needed a band and a soundtrack for a moment of grief and healing, it borrowed U2.

In that same way, it may be forever impossible to listen to Irma Thomas' beautiful After The Rain and not be flooded with images of Hurricane Katrina and its devastating tangible and psychological impact on the country.  It was feared that Thomas, a New Orleans native, might have lost her life in the storm.  This was quite obviously not the case; she was on tour at the time of the storm.

It makes for a better story if All That You Can't Leave Behind is a post-9/11 album and if After The Rain is a Hurricane Katrina record.  Unfortunately, those stories aren't exactly true.  ATYCLB was released almost a full year before the terrorist attacks on NYC and Washington D.C.  All but one of the songs for After the Rain had been chosen before Katrina pummeled the shores of the Gulf Coast region.  Both records make such powerful statements that they transcend timelines.  These are special albums made for trying times.

The chasm between Thomas and contemporary pop-R&B singers could not be any wider.  The overwhelming majority of contemporary singers rely on bombast, and big, tremolo voices.  There's no reason to feed any specific names to the lions because everyone is doing it.  I don't know if that large, overwrought bluster passes for emotion with today's audiences or if it bludgeons emotion into submission to the point where audiences don't know or don't care about the difference.

Big sounds and vocal calistenics now pass for talent, as well.  Listen to people talk about American Idol contestants (I'm not singling any one of them out) or established pop stars and you're likely to hear the following: "Whether or not you like [insert name here], you have to admit they really can sing."  I go apoplectic every time I hear that and am overtaken by an immediate urge to hurl someone in front of a speeding bus.  Loud shrieking and the ability to trill through 1,000 notes is the vocal equivalent of an Yngwie Malmsteen guitar solo.  Can the guy play at speeds that defy the laws of physics?  Yes, but damn him for doing it because there's nothing pleasing or special about the music that produces.

After The Rain is beautifully played relying mostly on acoustic instruments.  The understated music leaves space for Thomas' deep, rich voice.  Her age, experience, restraint, and nuance bring the stories, characters, and emotions in these songs to life.

The first song I recognized on this album is "Make Me a Pallet On Your Floor."  I recognized it because Gillian Welch performs a version of the song on her Soul Journey album.  Naturally, I had to compare the two.  I am happy to report I like both versions of the song.  Gillian Welch's version is filled with a pitiful, innocent sadness.  In Thomas' hands, the song takes on a tired, world-weary exhaustion peppered with dignity, resignation and a hint of anger.  Thomas' interpretation of "Make Me a Pallet On Your Floor" seems to perfectly embody the plight of the Katrina victims — perhaps even more than other songs on the record that specifically mention storms or rain.

"Flowers" combines elements of country, gospel, soul, and R&B and that combination works better than I ever could have imagined.  I don’t know which is the match and which is the gasoline, but the mixture creates a blazing fire.  "These Honey Dos" sprinkles elements of jazz with some fine piano work.  Thomas sounds completely at home even as different musical elements and sounds are incorporated.  She is always center stage on these songs without ever sounding like she's competing for it.

This is a beautiful, deep, moving record that stands on its own and simultaneously stands for something greater.