A absolute jewel of a recording …! 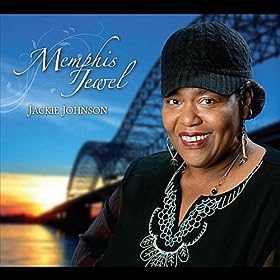 There’s a bit of a resurgence in classic soul these days, what with the likes of Joss Stone, the late Amy Winehouse, and Adele getting lots of airplay. All well and good; there’s a reason, after all, that the sound is considered classic, and good music is good music no matter where, when, or why it’s made.

Like the blues, though – arguably the musical source of soul’s powerful emotive punch – classic soul, the real stuff, is best delivered by a voice that’s been around the block a time or two. Sure, young and callow performers can deliver a fine approximation. But to really send a tingle down one’s spine, a singer’s got to have lived through the joy and pain.

Jackie Johnson started singing in church as a child. She recorded a pair of gospel albums in the 90’s, but apart from that she’s remained largely in the background ‘til now. Memphis Jewel, on tiny Catfood Records, should raise her profile considerably – she’s more than capable of carrying a project on her own.

Catfood Records, it’s worth noting, is also home to Johnny Rawls, a fine soul singer and guitarist in his own right. Members of his band provide much of the backing (the cast, though, is quite large), and Rawls himself duets with Johnson on his own “Love You Still,’ one of many highlights.

Produced by Jim Gaines, who’s worked with the likes of Santana and Stevie Ray Vaughan, Memphis Jewel shimmers like neon on rain-slicked streets. There’s a nice studio sheen, but the instrumentation is thoroughly organic, with lots of scratchy rhythm guitar, burbling keys, and bold, brassy horns. Front and center, though, is Johnson’s rich, powerful voice. She leads the way through a varied program that includes covers of “It Should Have Been Me” (a hit for Gladys Knight ‘way back in ’68) and Smokey Robertson’s “Tears Of A Clown” as well as three originals courtesy of bassist Bob Trenchard, another Catfood Records regular.

Along the way there’s lots of variety, from the percolating bounce of “Nothing Last Forever” to the slinky, seductive “Do Ya,” a lament for a love that’s fading fast. There’s a distinct New Orleans feel to “Brightside,” with its busy second-line percussion, while “Will You Be Mine” brings things back to the bedroom. “Clean Up Woman” reprises Betty Wright’s classic 70’s hit, and Johnson’s gospel roots get a bit of a workout on both “Wash Your Hands” and “Keep The Faith.”

Counting Johnson herself, there are sixteen musicians involved in the project, yet while the sound is full it’s never cluttered. Craft and care are evident throughout, and Johnson delivers each tune with assurance and power to spare. She doesn’t have to strive to get her message across – hers is a voice that conveys conviction with unaffected and unerring ease. Johnson isn’t posturing or posing or acting her way through these songs - she’s simply telling the truth, in a most marvelous musical manner.

Memphis Jewel is indeed a jewel of a recording. Recommended!