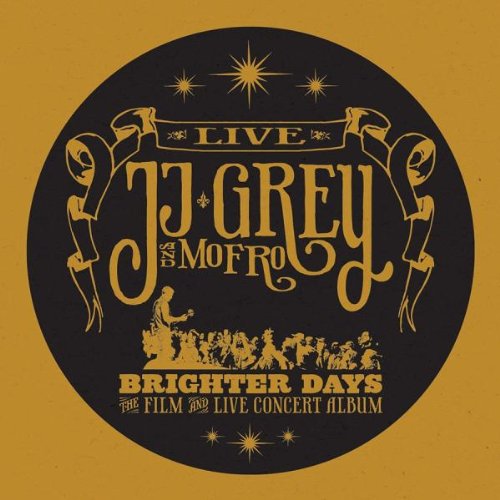 After five studio albums, JJ Grey & Mofro released their first live CD/DVD package Brighter Days earlier in September of 2011. It's surprising a band that has lived on the road and built such a strong following would wait this long to capture that part of their identity but the patience pays off, providing Grey a deep catalog of material from which to choose for the January 22, 2011 performance they filmed at Atlanta's Variety Playouse.

Brighter Days is a CD and a DVD and the programs are different so we'll deal with them separately but before we do I have to again voice my frustration with a practice not unique to this set. BD is a single performance recording, which I absolutely love and wish more bands would offer. I'm sure the intent was to keep the price down but I wish the complete show was presented in both audio and video. Offer a 2CD/DVD deluxe edition as a limited run. Offer fans who buy the set a code to download lossless and/or lossy files of the entire performance or the missing songs. Do something! There are a trillion challenges facing the music industry today, some of their own making and some from factors beyond their control. People will pay for music and one of the ways to make that happen is offering more choice, not less, more value, not less. Here endeth my rant and I reiterate: this is not unique to Alligator Records, JJ Grey, or Brighter Days.

Let's get to the specifics of the release where 12 songs are culled from the concert for the CD and there's good flow from track-to-track despite missing banter and songs. It's a satisfying listen bolstering Mofro's reputation as a top-notch live act. We get some of Grey's intros and banter and he proves himself an engaging frontman but more importantly is the band's ability to inject life into some great songs. I didn't discover them until their most recent studio album Georgia Warhorse. I've since bought most of their albums and will complete the collection. Listening backwards gave me an appreciation for how much Grey has grown as a singer, songwriter, and musician. The older material performed by this band stands strong alongside the new songs.

I've gone back and listened to Lochloosa and Blackwater and I like those records better because of how well songs from those discs were performed on Brighter Days. I also like the live versions better and all of that is part of what makes live music and great performers special. I'm sure longtime fans will quibble with a track here or there but the CD functions almost like a live "Best Of," or at least a very good introduction to the band's first five albums.

The DVD gives us the full show and while Grey may not be one of those hyperactive frontmen, he deftly alternates singing, playing harp or guitar, and interacting with the crowd. The concert portion of the film is photographed well with no bizarre angles or overly artsy maneuvers and the sound quality and mix are excellent (there's both a Dolby 5.1 and a Stereo option).

I do have a gripe with the DVD and like the earlier gripe it's not unique to this package. I'm not a fan of interspersing documentary and interview footage into the concert film. I don't know who thinks this is a good idea. If it will all fit on a single DVD, make the documentary separate from the concert!

At least Brighter Days only commits the cardinal sin of laying in interview footage over the actual music a couple times but it's frustrating because they do it over "King Hummingbird," one of the songs not on the CD, and "The Sun Is Shining Down," one of the emotional highlights of the set. Listeners and viewers lose out in this exchange and it's avoidable by either A) not doing it at all or B) offering the full concert in audio format.

Fans who've been waiting for someone to professionally document what they've long known, that JJ Grey & Mofro are a great live band, should be happy with this despite a few quibbles with some decisions in the presentation. This is also a great package to introduce the unfamiliar. It could have been brilliant, instead it's merely fantastic. Brighter Days is a triumph.