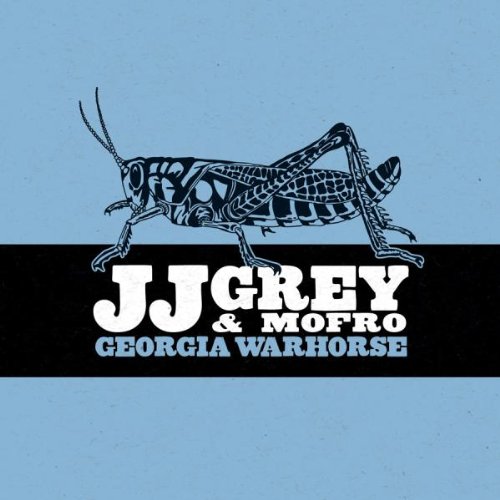 In a time of chimpanzees, JJ Grey & Mofro are a monkey and Georgia Warhorse just wasn't made for these times. This is an AM record in an FM -- now XM -- era. The only nod to modernity to be found on the album shines through in the debt it owes to a multitude of AM radio stations rather than mining the solid gold of only one.

Georgia Warhorse is a dirty Southern soul record with deep roots in blues and R&B and some gentle nods in the direction of Southern rock and gospel. The JJ Grey & Mofro playbook is to submerge everything in a grimy coat of murk, emphasizing groove and atmosphere. Tunes, melody, and instrumental showboating are subordinated. The emphasis on ensemble sound translates to the idea of Georgia Warhorse as an album rather than a collection of singles, another retro idea in the digital age.

So we've established Grey & Mofro owned a radio and had some good records in their collection but is this more than a collection of influences? Most of the time, yes. There are tracks that feel like little more than pleasant, appealing pastiches of the Mofro sound. Hearing the raw material is enjoyable but not nearly as enticing as having those elements draped over a fully realized song.

"Diya Dayo," the album's opener, puts a foot in each of those camps.  Lyrically, it's nonsense; musically it is dirty roots-based disco that sweats and struts over a funky groove with squalls of harmonica. The musical might makes right but it could have been so much more if it were an actual, well, song.

"The Sweetest Thing" is just that; it's an actual song and it is a sweet slice of retro soul and R&B. This would have been a classic, hit single in the '70s and when it could have been played on pop, soul, funk, and R&B stations. The secret weapon on this song is the guest vocal by Toots Hibbert, who brings some gravitas and gives it something a little meatier.

"Beautiful World" is a tender, soulful ballad and its sincerity and sweetness drips like a humid, Southern summer day. Grey's passionate vocal steals the show here but without going over the top. Closing the album is "Lullaby," a harrowing nocturnal song that sounds about as soothing as the lyrics of "Rock-A-Bye Baby." Derek Trucks guests and his distorted slide guitar is eerie and thrilling, heightening the tension and drama.

Georgia Warhorse is about as good as the sum of its influences and greater than the sum of its parts. The highlights on this record point to them being able to do more but what they have here is easily good enough to be enjoyed over and over again.