'Blues Conspiracy' is a live album that crackles with energy and the beautiful contradiction at the heart of the blues: that music so often centered around heartbreak and hard times can make you feel so damn good. 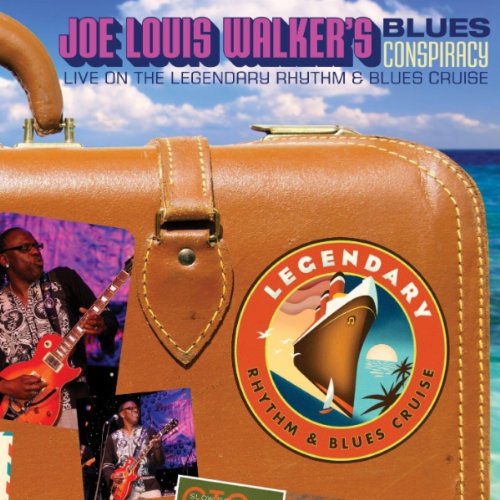 Earlier this year my wife and I celebrated our tenth anniversary.  We talked about ways to celebrate and friends asked if we had any special plans and it was an inevitability someone would suggest we take a cruise.  The two of us would nod and smile politely, knowing neither was really up for that sort of thing.  For starters, we don't like baking in the heat of tropical climates.  We live in Alabama and if there are places in this world that get hotter – and I'm told there are – we don't want to find them.  We're not beach bums.  We don't really like boats.  Not on a boat, not with a goat, not even if we're only sailing in a moat.  I do not like them, Sam I Am, but while a cruise doesn’t seem like something in the offing for us, we all know how the story ends and I might just have found a 'but' in this equation.

In the several years I've been part of the Blues Foundation, I've heard an awful lot about the Legendary Rhythm & Blues Cruises and the staggering amount of talent that comes along for the ride, performing and entertaining for diehard blues fans who don't object to things like oceans, water, boats, sand, and beaches.  The roster of performers who take part in these package cruises is impressive enough to make me wonder if tequila and Dramamine can make me forget the rest.

Joe Louis Walker's Blues Conspiracy – Live On The Legendary Rhythm & Blues Cruise is the best, most persuasive marketing tool this annual cruise could hope to have.  This live album captures performances from two nights on the January 2010 cruise and Walker is joined by guitarists Johnny Winter, Duke Robillard, Nick Moss, Tommy Castro, Tab Benoit, Todd Sharpville, Kirk Fletcher, Paris Slim and Paul Nelson, organist Mike Finnigan and pianist Mitch Woods, harmonica aces Kenny Neal, Jason Ricci, and Watermelon Slim, as well as guest vocalist Curtis Salgado, all in addition to his own band featuring Linwood taylor, Kevin Burton, Henry Oden, and Jeff Minnieweather.  Is that any good?  Is that too good?  It is a lot of cooks for 11 songs and the only way you could screw up a live album with that much talent is for someone to forget to hit the "Record" button or for ego to trump musicianship.

Fortunately for blues cruise attendees and those of us tuning in to Blues Conspiracy, that didn't happened because as Walker tells the audience everyone checked their ego at the door.  That generosity of spirit among allows fans to experience dream collaborations from artists of different generations and backgrounds, all united in the service and ministry of the blues.  It also provides a real showcase for the talents of Joe Louis who, despite such an astonishing roster of talent, remains at the center of it all as vocalist, guitarist, and appreciative emcee.

Because the artists have indeed checked their ego at the door, we don't get anything in the way of headcutting contests between the guitar players but that doesn't mean there aren't spirited workouts.  Walker and Kirk Fletcher tear into "Ten More Shows To Play" with explosive energy, trading solos.   The guitar duo becomes a trio when Duke Robillard and Todd Sharpville take the stage for "Tell Me Why."  Sharpville has performed as part of Walker's touring band and has a CD coming out later this year.  All three men take their moment out front and the judge's can toss aside their scorecards because there were only winners, especially the audience.

Of the many treats offered on this set, one of the sweetest is the collaboration with Johnny Winters on "Ain't That Cold."  Walker speaks of his admiration for Winters and then steps back and gives him room to lay down one of those vintage, shrieking slide solos that made him famous.  Winters isn't able to tour often and hearing him able to still bring the heat is special.

In addition to some great guitarists, Walker also shares the stage with some amazing blues harp players, including 2010 Harmonica Player of The Year Jason Ricci, who joins Walker and Nick Moss for a stellar "Born In Chicago."  Multiple BMA-winner Watermelon Slim plays an extended jam with Walker on a 12-minute "Sugar Mama" that crawls and simmers to the delight of the audience.  Kenny Neal and Walker have genuine chemistry on "Poor Man's Plea."

Blues Conspiracy is a live album that crackles with energy and the beautiful contradiction at the heart of the blues: that music so often centered around heartbreak and hard times can make you feel so damn good.  I don't know if this will actually get me on a cruise ship but it's a lot cheaper than a ticket and one hell of a lot better souvenir than one of those "My Parents Went To ___________ And All They Brought Me Back Was This Lousy T-Shirt."