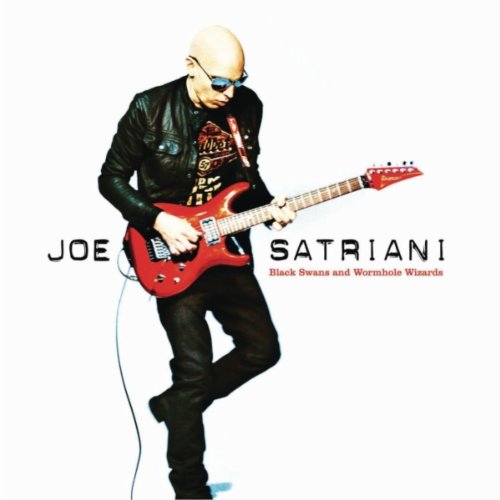 What makes Satriani's longevity more unlikely is that he has relied on his ability to translate new musical ideas with classic Satriani sounds and approach.  There have been dabblings with other sounds and styles – Engines Of Creation being a guitar/techno collage – but he has largely stayed true to his own course succeeding on the strength of his unique gift for wordless storytelling.  He has a way with melody and songcraft, writing guitar-based jams that have the equivalent of a verse-chrous-verse pop composition.  Classic Satriani songs have melodic constructions flexible enough to allow for technically complex guitar solo variations but strong enough to prevent things from devolving into a series of tedious, intellectual exercises.

"Premonition," the first track on Black Swans, is vintage Satriani in design and execution.  What distinguishes it from other songs in his canon is the way the melody and texture explore the mysterious connotations of its title.  Many of his songs have nonsensical or disposable titles but this is an aural definition or sketch of what a premonition sounds like.  It's a gripping image to explore and invoking it at the beginning of an album of songs is a master stroke.  What better way to introduce what is to come than in the form of a premonition?

"The Golden Room" opens with mystical sounds reminiscent of the glorious epic "Oriental Melody" from Strange Beautiful Music before a snarling riff that gives a little tone nod to '90s-era Eddie Van Halen falls beneath that.  With the basic pieces of the song in place, he plays more of that voice-guitar and zigzags his way across the riff and exotic rhythm through verse and chorus-like passages.

"Wind In The Trees" opens with sparkly, beautiful harmonics that transition into a shimmering, liquid rhythm bed for the quivering, tremolo guitar that serves as the song's vocalist.  "Wind" doesn't have that verse-chorus-verse structure but there is a structure and a flow that culminates not in a guitar solo but in the piano solo from Mike Keneally.  "Wind" is a notable departure for Satriani in that regard as sidemen have rarely – if ever – been featured on his past albums.  His instinct to let Keneally go is the right one as he takes the song in unexpected directions with a piano solo that feels classical in nature but with the improvisational twists and turns of jazz.

Those three are the highlights of the record but there are other pleasures to be found among the album's 11 or 13 tracks (Best Buy has an exclusive version with two additional tracks). "Solitude" may feel too derivative of previous Satriani songs like "Baroque," "A Day At The Beach," or "Tears In The Rain" but I don't care because it's simple, pretty, and brief.  "Light Years Away" has some of the best solo chops on the record and will attract the obsession of would-be followers.

Art needs pioneers and explorers willing and eager to find new terrain.  Satriani was a trailblazer when he released Not Of This Earth and Surfing With The Alien.  He knocked down doors for others and many have followed but he and his audience are the greatest beneficiaries of his innovations.  Black Swans And Wormhole Wizards is a very strong effort from a musician who sounds as comfortable, inspired, and engaged as ever