Review: Joe Satriani - Professor Satchafunkilus And The Musterion Of Rock

Satch runs low on fuel after a string of strong releases... 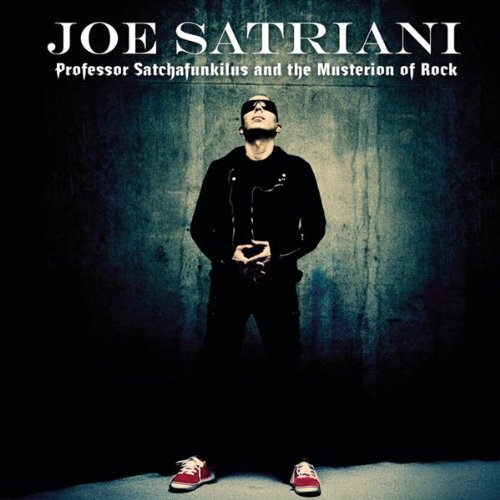 One of the amazing untold stories in music these past 20 years is how an artist like Joe Satriani has maintained an audience for this long.  Think about this for a moment.  This is a guitarist/composer whose indie label got bought out by a major and he has been with that label since his first album, Not Of This Earth, in 1986.  This is a guy who, fairly or unfairly, got lumped in with the hair metal crowd of the '80s and has managed to not only continue to work but has continued to work at a major label.

This is an artist who works primarily – almost exclusively – as an instrumentalist and he's never had the fluke pop chart success of that walking punchline Kenny G.  His music has never been especially fashionable, but here he is with his 13th studio record.  With all of the troubles of record labels in recent years and all of the consolidation and the upheavals that result from bad business models and shifting tastes, how is it that Joe Satriani is the last man standing?  I wonder if he isn't a little like Milton Waddams from Office Space where he's been around so long and no one can remember if he still actually works there or just keeps showing up.  Maybe the fat cats at Sony have just forgotten he's still on the label and his records manage to trickle out every couple years anyway.

I'd love it if the explanation was the various label heads who have run Sony over the years recognized the obvious quality when they heard it but we're not children and we all fuckin' know better.  However he's managed it, he has survived long enough to make Professor Satchafunkilus and The Musterion of Rock the latest chapter in his ongoing "least likely to succeed" epic.

I broke one of my cardinal rules with this record and this review by reading another review before writing my own.  I had the typical Fanboy reaction to seeing them put down a record by one of my heroes.  I'm disappointed that I'm going to agree with many of those conclusions.

The opening track, "Musterion," does indeed play like a leftover from Flying in a Blue Dream.  It's a very good composition but it's difficult not to feel like we've been here before and heard it done better.  It's a good song but it doesn't throw that knockout punch to open the record, nor does the next track "Overdriver."  It can't be as easily pigeonholed as a remnant of a specific album and is also a strong track that fails to captivate the listener.

"I Just Wanna Rock" is the first time the record falls off the edge of the cliff.  Satriani's singing gets ripped on those rare occasions when he adds a vocal to one of his songs.  His lyrics are actually worse- far worse.  From the pen of Joe Satriani we've gotten such inspirational and influential thoughts as "I don't want what you want, I want what I want" and "I just wanna ride/ get on my bike and ride."  Brilliant.  Even though "I Just Wanna Rock" doesn't technically feature vocals (a Frampton-esque voice box is used, though) we get the sense Joe is trying to say something here and we really wish he wouldn't.

"Professor Satchafunkilus" is, as you may have surmised from the title, somewhat funk infused.  The degree of funk probably depends on your internal sense of rhythm.  I have very little and I still don't love this one.  It's better than "I Just Wanna Rock," but that is faint praise.  This is the playful side of Satriani's musical persona; we've gotten interesting songs from this side of him but neither of these songs are among them.

The next three cuts go a long way towards making us forget the previous two, but aren't especially memorable themselves.  Of them, "Revelation" comes closest.

That leads to what might be the worst instrumental track of his career.  "Diddle-Y-A-Doo-Dat" would rate as a good Yngwie Malmsteen song, which means it's not much of a song at all.  It opens and closes with a torrent of staccato notes.  In between these annoying passages, the song staggers into more familiar Satriani territory.  The midsection isn't patently terrible, nor it is it engaging.  I'm pretty sure this, like "IJWR" and "Professor Satch," is Joe having fun with us again.  Where Malmsteen would have called a song like this something like "Dragon Opus in E#," Joe calls it "Diddle."  I call it something else.  NEXT.

At 10 songs, the album is a bit short on compositions but the final two songs stretch longer.  "Asik Vaysel" isn't an unpleasant listen but a memorable melody or riff is never established and the song goes on too long without ever having gone anywhere.  Album closer "Andalusia" is noteworthy because because of the prominent use of acoustic guitar.  Acoustic songs are rare and when they're used they take center stage.  Here he uses acoustic as a supporting instrument and builds some nice tension before releasing it with an amazing flurry of electric virtuosity.

The playing is always fantastic and the supporting band and technical craftsmen who helped assemble the record do so flawlessly.  It is the composer that lets us down too many times to make this an essential chapter in an improbable career that has provided us with better albums than this.  Professor Satchafukilus is not so bereft of enjoyable moments to squash any hope that there might be better albums in the future.  Let's hope his label's case of amnesia continues in perpetuity.