This is the definitive version of a classic album... 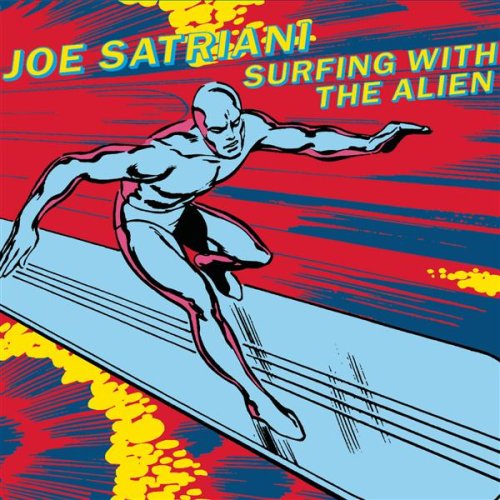 Joe Satriani's groundbreaking Surfing With the Alien turns 20 and is being re-released in an expanded format to mark the occasion.

What's groundbreaking about Surfing With the Alien? Think of it in Christopher Columbus terms.  Columbus didn't discover America, if by discover you mean actually arriving here first.  He did, however, get here and the arrival started a chain of events that had a significant historical impact.

Satriani didn't discover a genre nor did he change the course of human history.  He did expand the language of rock music's most important instrument – the electric guitar – and took it places it hadn't been.  Surfing is also noteworthy because of its surprising commercial success.  It reached the Billboard Top 30 and sold more than 2 million copies.  That's modest success for pop stars but those are staggering numbers for a guitar-based instrumental record.  That success allowed him to stay at a major label throughout his career and opened the door for a slew of peers and imitators.

The expanded edition features a CD containing the remastered album, a bonus DVD, and expanded liner notes from Satriani himself.  The occasion is special and so is the album, so one would expect the same from this Legacy Edition.  Does it meet those expectations?

The Album
This edition is its third sonic incarnation of Surfing.  The album was originally mastered by Bernie Grundman and released in 1987 by Relativity Records.  In the late '90s, George Marino remastered the album.  The Legacy Edition was again remastered, this time by John Cuniberti, whi co-produced the album when it was originally recorded.  Bringing him in to oversee the remastering process is an inspired and appropriate choice, one more example of the love and care that went in to producing the ultimate version of this classic album.  So, what does all that mean?

After an album is recorded and mixed, it is sent off to be mastered where a bevy of sonic adjustments can be made.  This post-production process creates a single source from which all copies of an album will be produced and represents the last best opportunity to make the music sound great.

Both the Marino and Cuniberti masters are superior to the original Grundman version and fans of this record really should have one of them.  The leap in quality from the original pressing to these subsequent releases is a quantum improvement.  Careful listeners will find Cuniberti's master is an upgrade over Marino's but only by a step rather than a leap.

When all the studio sorcery and after-the-fact tinkering has been done, 10 songs and 38 minutes of the most amazing guitar-based instrumental music remain.  For all that has been written about his extraordinary gifts as a player, his concept of melody has gone underappreciated.  What separates Satriani from virtually every other guitarist is that he is a capable composer, that his songs are more than a collection of licks and solos.  He would progress as a player, composer and compose great pieces of music over the next 20 years, but he has yet to craft a collection of songs that feel this interconnected.

The DVD
This is the real treat for diehard fans that have already purchased one or two copies of the album.  The bonus DVD is comprised of three parts: a spoof interview with Spinal Tap's Nigel Tufnel, music videos for "Always With Me, Always With You," and a previously unreleased live set from the Montreux Jazz Festival.  The Tufnel interview is amusing, but most viewers won't watch it more than once.  The videos are not vital visual experiences but belong on a package like this that strives to be the ultimate expression of what the album was about.

The Montreux performance captures a set he, drummer Jonathan Mover, and bassist Stu Hamm played at the famed festival on July 15, 1988.  The hour-long set is not a blazing performance, but the story behind it – retold hilariously in the liner notes – probably explains why there are occasional lacks in precision by the band.  The set mixes a few songs from Not of This Earth as well as Surfing.  Both Hamm and Mover are given brief solos.  I never get tired of hearing Stu Hamm play Beethoven on the bass, nor do I tire of marveling at the two-hand technique that produces it even if it is a little disheartening to see he's been playing more or less the same bass solo all these years.

This trio would tour extensively and they would get tighter as a unit – the live set on Time Machine — but this might be the only filmed footage of them on the Surfing tour, which alone makes this a worthwhile purchase.  It's not uniformly great but it's never terrible and there are frequent moments of sonic nirvana.  The DVD gives the options of DTS, Dolby Digital, and Stereo mixes.

The Liner Notes
I can't help but think my pal Gordon Hauptfleisch, a fabulously talented writer and expert on the joys of liner notes, would appreciate the lovely booklet that accompanies this release.

Digital music and the digital marketplace have their place in the music universe but there are some things digital just cannot deliver.  The feel of the tangible object, the fun and excitement of flipping through pages of lyrics, credits, and exposition on slick pages held in your own hands are all part of the experience, part of the experience digital cannot deliver.  The liner notes do more than give background on the album, they tell us something about the creator.  His ambitions, confidence, doubts, and humor are all on display in track-by-track notes, the stories he tells about the making of the record and the ill-fated Montreux performance.

The music has no words, so it is in the presentation of this 20th Anniversary Edition of Surfing With the Alien that we see how personal this record still is to Satriani and how much love he still has for it.  The glossy pages, the photos, the notes, the remastering, the DVD… all of these combine to make this feel like a big deal, giving fans the opportunity to participate in the joy of these songs once again.

The third time is the charm for Surfing With the Alien.  This is the definitive version of a classic record.