A great re-issue of a blues treasure... 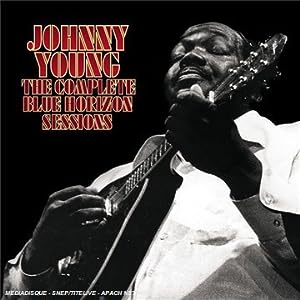 I never in a million years would have thought a mandolin could or would be part of a Chicago blues record until Gerry Hundt released Since Way Back. That record was a real eye-opener for me. First, it was a fuckin' fantastic record in its own rite. I still listen to it and no one I've loaned it to has said anything but great things about it. In addition to being a great record, I learned a little bit about the tradition of mandolin in blues. It's not the most commonly used instrument but it's not unheard of, either.

Nick Moss & The Flip Tops played Huntsville and during the show Gerry Hundt covered Johnny Young's "Money Takin' Woman." It was a great performance of the song and reminded me I'd yet to really go investigate the mandolin tradition for myself. I liked "Money Takin' Woman" and I like Hundt and he likes Young so I decided that would be a good place to start.

As with many great blues artists who are no long with us, Johnny Young's discography is a bit of a mess. He recorded with a handful of labels over the years, many of which are now defunct and that makes tracking down his recordings a bit of an adventure. Some albums were never released on CD while others are out of print, meaning if you are lucky you might find an old copy on vinyl. Maybe.

I can't imagine why in this day and age someone would be bothered, but someone at Sony decided to gather Johnny Young's sessions for Blue Horizon and have them remixed, remastered, and released on CD. I'm sure that person has since been fired because this is not how things are done in the Land of Corporate Stupid, but I owe them a big thanks.

The Complete Blue Horizon Sessions is really Young's 1969 Fat Mandolin record, expanded with some alternate takes and some material recorded during those sessions that was never released. The Bible says a man is known by the company he keeps. That is particularly true in the music world. There are some great musicians who aren't widely known but are respected by artists with more acclaim. For Fat Mandolin, he was backed by longtime Muddy Waters sidekick Otis Spann on piano, Paul Oscher on harmonica, Sammy Lawhorn on bass and second guitar, and S.P. Leary on drums. That's a hell of a band! On other records, Young was backed by Spann and harp geniuses James "Superharp" Cotton and Big Walter Horton. You may not know Young and you may not have heard a lot of blues mandolin records, but these heavyweights worked with Young throughout his career and that says a lot.

Speaking louder than the associations and the history and tradition of blues mandolin is the music these men created. The infectious, swinging groove of "Moaning and Groaning" opens the set and it's one of the tracks where Young's mandolin is right out front. In addition to some great mandolin work from Young, Oscher is commanded to "blow" at the first break and he delivers some fantastic harp. Later on the track, and throughout the record, Young calls out to Spann and stands aside for one of the pioneering blues pianists to take center stage.

When playing alongside Muddy Waters, Spann sometimes sounded like he was playing with his fists, not his fingers. The power in his playing is something special. On these numbers, he dials that down just a notch. As great as Young's mandolin work is, it's pretty clear Spann is holding these sessions together (in fact, it was at his suggestion Blue Horizon recorded Young in the first place). Spann got plenty of work as a bandleader during his time with Waters, and that leadership is evident on these tracks. It is made more evident by his absence on "Prison Bound."

Other standout tracks include "Jackson Bound," mistakenly referred to as "Chicago Bound." The liner notes tell us this cut is actually a version of John Lee "Sonny Boy" Williamson's (the first Sonny Boy Williamson) "Shotgun Blues." Regardless, it's a great track. It starts off with a false start and even sounds a little tentative when they begin but slowly pick up steam as they play, culminating in a great piano run by Spann followed by Young's mandolin. "Lorraine" doesn't have quite the swing of "Moaning and Groaning" but there's such a great feeling on the track and Young's work is top notch. This is also a track where Leary's fine drumming is invaluable.

The care with which this set was assembled also speaks volumes about the quality its musical contents. Mike Vernon has done a tremendous job researching these sessions — even uncovering mistakes in the recording dates — and his love for the music being presented is evident. The liner notes are well written, the packaging glossy, and the mixes and masters are excellent. The digital presentation of the record crackles, probably a little more than the original mixes presented on analog. Some audiophiles will prefer those but the clarity and muscle on the Complete CD is not without its virtue.

In the liner notes to Hundt's Since Way Back, he says "I know blues mandolin is new to many blues fans... I hope the record encourages them to seek more blues mandolin and to seek more live music in general." Listening to Hundt's record and hearing him cover Young in concert made me hungry to do just that, and now I hope I can in turn encourage all of you to do the same thing. The Complete Blue Horizon Sessions is an excellent place to start. I guarantee you won't stop there. Ask me how I know.