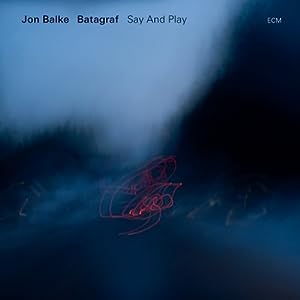 Norwegian jazz pianist Jon Balke formed Batagraf in 2002, who have a fascinating approach. They are percussion based, with the addition of poetic element, and Balke’s own keyboards. Batagraf’s mission is a basic one, a weave of drum grooves and words, commented on by the occasional piano interlude. Speaking of Batagraf‘s style, Jon says, "Drumming is speaking and language is a miracle, in all its manifestations.” We last heard from Jon Balke on the wonderful collaboration he did with Amina Aloui, titled Siwan, on the ECM label. Say & Play is his latest ECM release, with Batagraf, and it is another excursion into the realm of so-called “world music.”

Say And Play opens with the 1:54 “Baka #65,” which is a wonderful statement of intent. This percussion-based track also utilizes a nearly chant-like vocal line to weave an intriguing spell upon the listener. Indeed, the drums are very much the core of this entire recording, while the various vocal sections add a very deep sense of mystery to the entire project. The various keyboards Balke uses are of some interest, as he tends to mix it up considerably. He switches from a very beautiful acoustic piano on tracks like “Riddle #1,” to what sounds to these ears like some very 80’s electronic-based instruments (ala the Synclavier) on “Riddle #2.”

While those titles do refer to each other, it would be too easy to call Say & Play a riddle. Balke, and Batagraf’s mission is very clear. Their goal is summed up fairly succinctly in the idea that drumming is both language and music. With Say & Play, they have achieved this goal in a way that is rare in jazz, or any music for that matter, is usually capable of. Say & Play is another highly rewarding release from this excellent musician.