Two Rock 'N Roll Survivors from the first all female band who ever released a major label album. 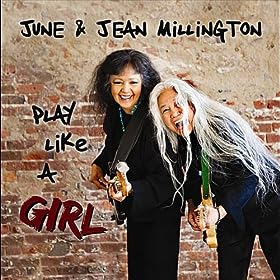 Does anyone remember the group Fanny? They were briefly popular in the mid-seventies, and had something of a hit with a song called “Butter Boy” in 1975. It was a pretty catchy tune, and was on the great Casablanca label - which at the time was cool enough in my book. They never really went anywhere after that song, so when an album by June And Jean Millington, titled Play Like A Girl showed up in my mailbox, I was more than a little surprised.

To my utter amazement, it turns out that Fanny were the very first all-female group to release an album on a major label. The quartet featrured June Millington (guitar, vocals), Jean Millington (bass), Alice de Buhr (drums), and Nickey Barkkay (keyboards). Even with David Bowie loudly proclaiming his bi-sexuality, and plenty of others jumping of the bandwagon - gay females were considered simply taboo.

Ridiculously hypocritical, without question - but that is the way it was. They were the only openly gay women that I can think of, besides the folkies such as Holly Near, Meg Christian, and Cris Williamson. Gay or straight, it didn’t matter to me. I was into KISS.

Fanny were not promoted as a “lesbian” group, and quite honestly it probably would have made a difference back then if they were “out.” But let’s please leave all of those concerns behind, and concentrate on the music. I still have no idea exactly what “Butter Boy” was about, but I do remember one thing; the song was catchy as hell. I remember Fanny for all the stupid reasons an  11-year old boy would. They were a four-piece, all female band with a catchy song, and it does not take a lot of imagination to figure out why a pre-teen boy would remember an all-girl group who called themselves Fanny.

So, now that we are all caught up - Play Like A Girl. is a pretty convincing slice of rock. It took me a while, but I actually located my old, Casablanca 45 of “Butter Boy” and played it back to back with Play Like A Girl. That old phrase; “The more things change, the more they stay the same” was never more appropriate.

There are certainly a variety of tunes and styles among the 12 songs that make up Play Like A Girl, but overall - this record has that mid-seventies sound down cold. There were a lot of different strains of music going on in 1975, but on Top 40 radio, there was a real trend towards an ersatz rockabilly, early rock ‘n roll thing. Suzi Quatro was big at the time - at least until she became Pinky Tuscadero on Happy Days.

The Runaways had formed, but Kim Fowley’s idiotic marketing did them in before they even really got a chance. The closest comparison I can come up with that people will recognize is Joan Jett’s later “I Love Rock ‘N Roll” single. Millions of people bought that record, and even though her audience has shrunk a bit over the years, her fans still love her.

June & Jean Millington’s brand of rock would definitely appeal to Joan’s fans. There are a couple of ballads here, and they are good - but I think the best stuff is their particular brand of rock. It looks to be a self-released project, available at their site. I’m sorry that I do not have more info about availability, but thought that in my small way, I might be able to help promote two very talented rock ‘n roll survivors. Give it a listen and check them out - the album is quite good.

If nothing else, you gotta respect anyone who survived Neil Bogart’s cocaine-ravaged Casablanca Records. The fact that these two did, despite what I imagine were incredible odds, wins a lot of points with me. And if I didn’t say it clearly enough before, Play Like A Girl rocks hard. It’s pretty damned cool to see these two back in action.