Chicago blues legend captured at one of his favorite haunts... 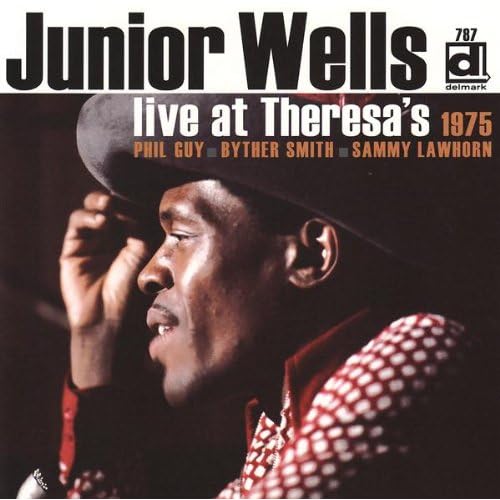 I am naïve enough to believe there was a time when music labels did not refer to albums as product or units; that there was a time when the music part of the music business triumphed over the business end of it. I certainly don't see many signs of it these days. Maybe my romantic notion never existed, but releases like Live at Theresa's 1975 fill me with hope. How many more treasures like this are sitting in a vault somewhere, waiting to be excavated?

When the Mt. Rushmore of The Blues is carved one day, Junior Wells' mug won't likely be one of the four heads immortalized in stone. That has nothing to do with the quality of his work. Wells is simply not one of those iconic figures like Robert Johnson or Muddy Waters, the latter for whom Wells played harp. Music fans might not know Wells, but blues fans do.

Where some live albums sound more manicured and glossy than anything molested by ProTools, Live at Theresa's is gloriously vintage and modern at the same time. Junior Wells spent many nights, like the two captured on this set, performing for and entertaining crowds at Theresa's in Chicago and that is the sense you get when you listen to this set. Wells sounds like you imagine he did on any given night. The performances and the banter between songs doesn't sound like a man preening for posterity. This is not a choreographed performance. The spontaneous nature and vintage sound of these recordings sound better than you would have any right to expect by some marvelous mastering. The snares snap and the guitars bite with vibrant accuracy, providing enough clarity to yield a marvelous listening experience without interfering with the authenticity of the moment.

Live at Theresa's proves that not only is Wells a singularly great bluesman, he is a captivating entertainer. He might not be on the Rushmore when it comes to his work on the harp or as a vocalist, but when you listen to Theresa's, you get a special appreciation for what a showman he was through the bits of between-song banter. You also get the feeling he might have been slightly insane. Buddy Guy, with whom Wells played countless times, tells a great story on the DVD to his recent box set Can't Quit the Blues of a drunken Wells roaming naked through the halls of a very nice hotel late one night, trying to get a Coke from a vending machine.

In addition to having some of James Brown's showmanship, Wells' blues is imbued with some funk and soul that surely would have appealed to The Godfather. Wells' work ethic might have rivaled Brown's, as he was known to play Theresa's seven nights a week when he wasn't on the road playing elsewhere. Opening cuts “Little By Little” and “Snatch It Back and Hold It,” the latter from Wells' landmark Hoodoo Man Blues album, have an undeniable groove. Purists may raise an eyebrow, but the ineluctable hooks will make even the dourest want to dance. Fans of Wells' playing might be a little disappointed because even when the music turns to the more traditional, it is the guitar work of Phil Guy, Byther Smith, and Sammy Lawhorn that carry the musical load. Wells' harmonica is audible, but not emphasized. The force of Wells' personality is powerful enough to prevent him from being overshadowed.

It is a shame it took so long for these performances to be liberated from their hiding place because individuality feels scarce these days. Are there fewer mavericks among us than there used to be? Did the mavericks change or did society? Maybe there are as many eccentrics as ever, but the power of our homogenized culture is more dominant. Whatever the case, 30 years in a vault has not diminished the power of the personality or the music of Junior Wells, and our need for both has never been greater.