Karen Lovely is one of the most powerful voices to hit the blues scene in years... 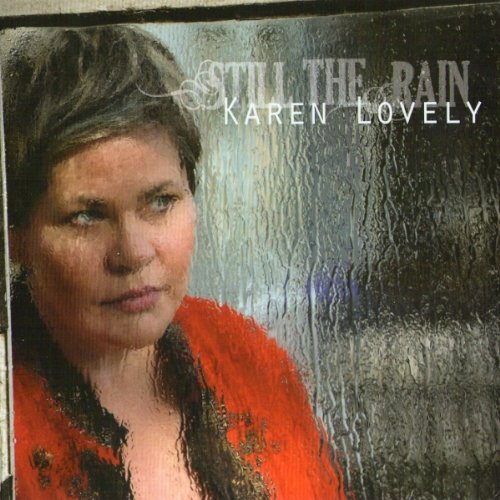 I first learned of Karen Lovely after she placed second at the International Blues Challenge last year.  I first heard her sing in an impromptu jam at Rum Boogie Café in Memphis and took notice when I saw she had a new record coming out this year, wondering if she, like so many before her, would use the IBC as a springboard forward.

After several listens to Still The Rain, one word kept coming to mind: natural.  She has a powerhouse, passionate voice and complete control of it.

When we think of musical excess in rock or the blues, we usually think of guitar players who play too damn many notes and think any space in any song must be filled with more testaments to their brilliance. We rarely think of music at all when we think of singers falling in love with themselves, but it has been known to happen, especially in pop and R&B.  I bring this up because if I had a voice like Karen Lovely, I'd probably oversing every note and fill every space of every song with something.  It might be an extraneous "ooh" or "baby."  She doesn't.  She seems to understand her voice says plenty without showboating and she's absolutely right.

The first song I heard from Still The Rain is "Never Felt No Blues" and those five minutes completely won me over.  You may not believe in Satan but when you listen to Robert Johnson sing about hellhounds on his trail, you know he believes it.  I'm not suggesting Lovely has become the equivalent of Johnson but she is powerfully persuasive on this spellbinding track.  Alan Mirkitani's guitar lead heightens the drama, echoing the piercing pain expressed in the vocal.

Not every song is as wrenching or dramatic but even when things dial down Lovely still delivers.  "Sunny Weather" isn't a prototypical blues song in construction or execution until a brief guitar solo kicks in but this is a great track.  The tempo is relaxed and so is the vocal yet it's still engaging as she sings with such clarity.  The pureness of her performanc makes this a pleasure to listen tol.  Among the other highlights on the disc are the heartbreaking ballad "Other Plans" and the rollicking "Blues Ain't Far Behind."  "Plans" is accented by some mournful tenor sax by Michael Vannice while Robert Cray Band pianist Jim Pugh's jaunting piano helps give "Blues" a nice kick.

There are a couple lesser moments on the album and they come in the form of a challenge that has plagued many song interpreters.  Lovely is still engaging when the material falters but there is a noticeable dropoff between those songs and the tracks that bring it all together.  Nothing on the record is terrible but there are so many great moments that it's easy to lose patience with songs that almost but don't quite work.

With her performance at the IBC, she introduced herself as an emerging force on the blues scene.  With Still The Rain, she boldly delivers on that promise.  Karen Lovely has arrived.