May not rise to the level of the music that inspired it but it's a fine listen... 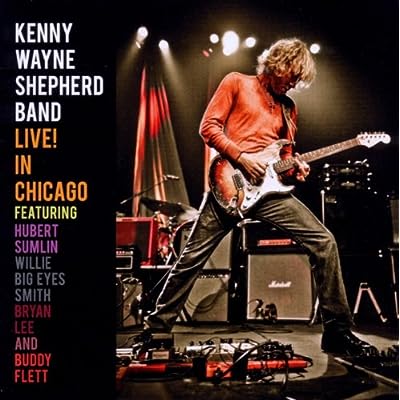 Kenny Wayne Shepherd Band's LIVE! In Chicago is a live album that serves multiple masters. It documents guitarist Shepherd, vocalist Noah Hunt, former Double Trouble drummer Chris "Whipper" Layton, and the rest of KWS Band performing songs from throughout their career, including cuts that became staples on rock and classic rock radio like "Blue On Black" and "Deja Voodoo."

It also gives Shepherd and Co. a chance to bring heroes, influences, and friends to the stage to perform alongside them. Among those joining the band are Chicago legends Hubert Sumlin and Willie "Big Eyes" Smith, two performers who made their name backing two of Chicago blues' greatest names: Howlin' Wolf and Muddy Waters, respectively. They are also joined by veteran performers Buddy Flett and Bryan Lee.

What you don't get from this is the sense they've captured the sound and feel of a typical evening with Kenny Wayne Shepherd Band. That doesn't have to be the stated goal of every live album and LIVE! does a nice job of splitting the difference. I enjoy the album for what it is and take some joy in hearing KWS play a couple familiar tunes I've always dug on a casual level as well as hearing them jam with Willie and Hubert, two guys whose work I adore. Shepherd is a talented lead player and he's got great taste in heroes. You don't get much better than those two guys and having it all take place in Chicago makes it even better, something not lost on Shepherd based on his liner notes.

The band takes the first four songs on their own, establishing themselves before welcoming the guests. They vary the song lengths, extending "King's Highway" and "Deja Voodoo" while keeping the reins on "Somehow, Somewhere, Someway" and "True Lies." Maybe it's because it's most familiar to me and maybe it's because they built up to it but "Deja Voodoo" comes off best in this first mini suite.

Buddy Flett and Bryan Lee both have great stories and their performances with the band are good but the real treat during the guest segment is hearing Sumlin and Smith. Smith came to prominence as Waters' drummer but started out playing harmonica. He has "retired" from drumming, moving out front to sing and blow that harp and that's what he does on "Baby Don't Say That No More" and "Eye To Eye."

There are many signatures sounds in the blues and Hubert Sumlin's guitar is one of those. It's one thing to recognize it on all the great sides he cut with Wolf for Chess in the '50s. It's pretty amazing the nearly 80-year old Sumlin still summons that power in his playing, bending a different generation of musicians to his will- not that these kids are resisting. They want to go where he leads and they get there, together, particularly on "Rocking Daddy."

They close the set with "Blue On Black" and the blues standard "I'm A King Bee." Not surprisingly it's "Blue On Black" that really carries the day. It's a damn good contemporary rock song and the band walks that balance of blues and rock really well. They rev up and rock "King Bee," trading some of the natural groove and shuffle present in the best versions of this oft-covered tune for more muscle. That's fine if that's your thing, but it also feels like a lot of sweat without the real heat.

LIVE! In Chicago has already proved popular with blues fans as the album has topped Billboard's Blues Albums chart and songs from this set have been all over blues radio. It may not rise to the level of the music that inspired it but it's a fine listen.