KABB takes a massive leap forward with their best album yet... 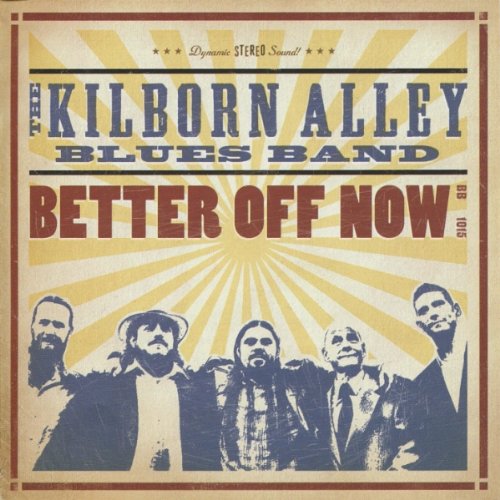 Shorthand has its uses but sometimes we lose things in translation.  Take a name like Kilborn Alley Blues Band.  It's a bit of a mouthful.  I often clip the name to Kilborn Alley or KABB when writing about them or discussing them with friends and strangers.  There's nothing wrong with that but it occurred to me the most important word of their name might well be that final "b:" band.

Kilborn Alley Blues Band puts a premium on ensemble playing, a tradition that has been obscured in the blues in no small part because of what rock and roll did to it.  Early blues were often single performers accompanying themselves with only one instrument.  Long, wandering solos just weren't possible.  When the blues sound expanded and bands began forming, some of the most influential blues bands had a unique approach to the solo.  Listen to some of those classic Muddy Waters' band singles when he was backed by Jimmy Rogers, Otis Spann, and Little Walter (and later harp geniuses like Walter Horton and James Cotton).  When it came time to solo, they all did.  At the same time.  On top of each other.  At least that's the way it sounded.  Muddy would be winging that slide around while Walter was blowing some killer harp and Spann was pounding away beneath.  It was chaotic and crazy and it all worked.

When the rock kids started building on the skeleton created by the blues, the solo was performed by a lone soloist and the songs often revolved around that moment and what a great moment it could be.  Rock's evolution from the blues spawned great music and that evolution in turn played a part in changing its source.  Blues solos started to take on that decidedly rock mentality in part because of the influence of rock and roll.

The KABB sound is seamless in a way I rarely hear today.  Some bands would create an ensemble by divvying up the solos among their members, making sure each got equal time out front.  That's not what these guys do.  Solos are rare and spare.  They're there and you can pick out the different instruments but the real sound is the way they can meld the harmonica and guitars and bond that to the rhythms being pounded out by Chris Breen and Ed O'Hara.  Their sound is thick and muscular, oozing and bloozing.  The pieces don't just fit together, they belong together.  It's the way they approach songwriting.

"Train to Memphis" is a great example.  Joe Asselin and Josh Stimmel each get spotlight time and they play their asses off but the coolest thing is the way everything sounds together.  For the final two minutes, they're all soloing, grooving, and weaving.  Asselin's harp is the sound furthest front but Stimmel and Andrew Duncanson have fused their guitars together into a shaking funk while O'Hara rattles off some fine percussion punctuation underneath.  It's the beautiful sound of five guys uniting under the flag of one song, and it's something KABB does throughout the record.

Many blues listeners might expect "Nothing Left To Stimulate" to be an ode to sexual innuendo, following in the proud tradition of the bluesman's (and blueswoman's) ability to imbue any turn of phrase with libidinous connotations, but they'll be in for a surprise. The band has turned their attention to an economic crisis that has crippled more Americans more deeply than any time since the Depression. Bad times for us are fertile times for the blues and Kilborn Alley has their finger on the pulse, delivering their own State of the Union with the kind of credibility you don't hear from leaders in Washington, D.C.

The music is a restrained blend of traditional and modern blues, distilled for purity.  They unleash a vintage attack, in and out in 3:30. Ducanson and Josh Stimmel's interlocked guitars ring and churn while harp ace Joe Asselin stands just off to the side, wailing.  They play that misery index and make it sound good.  "Nothing Left To Stimulate" blends traditional and modern blues elements with Americana roots rock. At the center of it all is Duncanson's natural ability to connect. He doesn't sound like a rich man singing a poor man's woes, rearing back and over-singing to create an aura of suffering.

Other highlights on the CD include a couple of the slower moments and it is Duncanson who once again shines.  Some vocalists have to work really, really hard to be interesting.  Duncanson has a naturally expressive voice and it's clear he's growing as a singer.  He's always had the voice but he makes everything sound so effortless, particularly on the title track and "Tonight."

Kilborn Alley Blues Band delivers on the promise of their previous records and reaches new heights. They've broadened their musical horizons without diluting their sound. They confidently move through different components of the blues — shuffles, soulful ballads, and hardboiled blues — and demonstrate mastery of them all.  They are more consistent than ever with no weak moments or missteps.  Better Off Now is one of the best blues albums of this or any year.