Review: Lee DeWyze - Live It Up 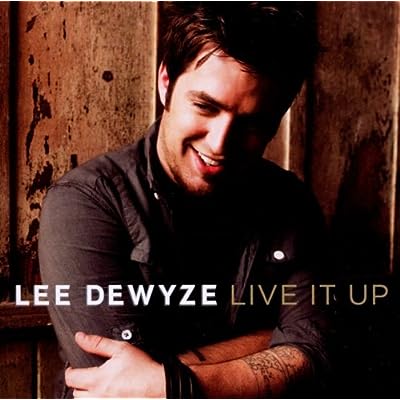 With American Idol set to go live in a couple of weeks, it seems like a good time to talk about the debut albums of last year's winner and runner up. Both the winner, Lee DeWyze, and the runner up, Crystal Bowersox, released their debut albums at the end of 2010. As of the end of January 2011, Bowersox has the edge on album sales but both albums are selling poorly. So, let's examine each album and see who comes out on top in terms of music and enjoyability.

Since Lee DeWyze was the winner, it only makes sense that we start with his debut album, Live it Up. The album was released on November 16, 2010 and sold 39,000 copies in the first week for a chart debut of #19 in the Billboard 200. Since then it has sold a total of 112,000 copies and ranks as the lowest debut in units sold for a winner of American Idol to date and the lowest chart position of an American Idol debut. People do not seem to be flocking to the stores to buy Lee's album like they did for past winners, but should they be?

Live It Up kicks off with the title track, a nice grooving rocker that has a John Mayer feel to it. Smooth guitars, soft vocals, and a catchy chorus are what this song is all about. It's a nice way to begin but I would have gone with something more hard hitting.

I would have started the album with the second track and first single "Sweet Serendipity." While the title seems a bit silly, the song uptempo and makes you want to get up and dance a little. It is a completely different vibe from the opener and something that could cross over Top 40, pop, and rock stations.

The vibe from "Sweet Serendipity" continues with the third track "It's Gotta Be Love." My only problem with this is the title. Lee sings "It's got to be love" during the song, yet they swap "got to" with "gotta" in the title of the song? Someone needs to be slapped for this egregious violation of the English language. Otherwise, I like it. It mixes that John Mayer vibe with a little bit of Jason Mraz and makes for a pleasant listening experience. "Isabelle" sounds like a sequel to Plain White T's "Hey There Delilah," and surprisingly it isn't terrible. I wouldn't skip it if it came on during an iPod shuffle. "Beautiful Like You" is a nice attempt at a Coldplay sound with piano, a cheesy sounding electronic drum, and some pretty harmonics thrown in leading to some hard hitting guitars during a sweet chorus. The song is actually one of my favorites because it is very pleasant on the ears and the lyrics are not half bad.

"Stay Here" comes out of the gate with a Prince like keyboard chord hanging, but quickly turns into something that sounds like it would come from previous Idol winner Kris Allen's album. With the syncopated drum track that carries through the entire song and the droning runs during the chorus, "Stay Here" comes off as a throw-away song that somehow made it on the album. "Me and My Jealousy" is another song that sounds a lot like another Idol alumn, this time Chris Daughtry.  The song itself is pretty solid.  I like how it starts nice and simple with piano before bursting into high energy and heavy guitars.  It was an unexpected change that worked well and this is one of my favorite tracks on the album.

DeWyze slows things down with "Brooklyn Bridge" and gives us another John Mayer-like track that has a nice lounge act sound with sweet piano and almost a crooner-like vocal.  "It is pretty, soft and sensual.  While the words get a little cheesy at times, it still makes you want to sway to the sound.  It makes for a nice change from the uptempo numbers that preceeded it.

"Weightless" is up next and once again we get a Jason Mraz-like tune with clunky guitars and a simple vocal.  The song also features an almost "Twillight Zone" synthesizer part that starts off each verse and fits the theme of being weightless.  A decent song, but not one of my favorites.  "Earth Stood Still" is an attempt at an upbeat love song, but for me it just doesn't work at all.  Not only are the lyrics dull, but the music itself isn't even fun.  This one should have been left on the cutting room floor.

Closing out the album is "A Song About Love," which is probably the most original sounding song on the whole album with a little bit of a country vibe going for it.  The lyrics are clever and fun, the music is simple yet engaging, and Lee gives his best vocal performance of the album.  It's a nice way to end the album.

Overall, Live It Up is enjoyable, but it suffers from identity crisis.  It sounds like Lee is still on American Idol with a new theme each week.  The songs themselves are not bad, but I want to know who Lee is as an artist and all I get is Jason Mraz, John Mayer, Kris Allen and the Plain White Ts.  Lee co-wrote nine of the 11 songs on his debut CD, but I wonder how much of the songs are actually his and how much are the other writers influencing where he goes with the songs.  I hope Lee gets another chance to show us who he is not who 19 Entertainment wants him to be (whatever that is).  In the end, this is still an album filled with fun songs so I can recommend you spin it.