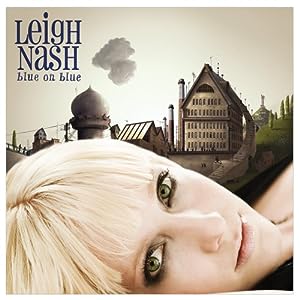 I was always a casual fan of Sixpence None the Richer.  I liked them well enough to be curious about a Leigh Nash solo record, but not enough to rush out and buy it the moment it arrived on store shelves.  I was strolling through a music store with a few bucks to burn, it was on sale, and I decided to roll the dice.

I listened to it once and thought it was nice.  I was neither transformed nor turned off by Blue on Blue.   It was pleasant, but did not make much of an impression, so it went in the pile with 30 other discs on top of my filled-to-capacity CD tower.  I had mostly forgotten about it until...

This weekend, while at work, the voices in my head started having a conversation without me.  I guess I overheard just enough of it to get the urge to give the disc another listen.  This, boys and girls, is why I have a 160GB iPod classic and keep wishing they'd make a larger capacity one.  I never know what I will be in the mood to hear.  I am able to fit the great majority of my music library on my iPod and can summon nearly any song I want any place, anytime.  Greatest invention of the 21st Century is what the iPod is.

So, I queued it up on Saturday and it has grown on me.  I do not think this is the album of the year.  It's not.  It is a good listen — and a pretty one, too.  The-Wife-To-Whom-I-Am-Married thinks it is hilarious I like all the songs about "how my baby done me bad."  She is right; it is funny.  I have been married for a while now and yet I have an obsession with songs about torturous breakups and doomed relationships.  I guess I buy a little too much into the adage that great art is the byproduct of pain.

There are a lot of artists who can make pain seem romantic, but not many can make happiness seem appealing.  If you think that seems counterintuitive, you are not alone.  So much of the "happy" music sounds contrived and fake, while the darker fare seems more authentic.  John Lennon is praised for his primal scream therapy set to music; Paul McCartney got panned for writing "silly love songs" (I wonder if Sir Paul will be changing his tune in light of recent events).  That is why it is a bit out of character for me to like this album as much as I do.  I have tended to be more in the Lennon camp than the McCartney one, but Nash's vocals, and to a lesser extent her lyrics, make happiness sound interesting.  Her voice is warm, inviting, and plain with just a teasing hint of exoticness.  I suspect, based on my taste, it is the brightness in her voice that sounds exotic to me.  There are no traces of rage, sultriness, or weirdness in her voice and yet I still like this record.

Many, but not all, of the songs are about the birth of her first child, which leaves me a little cold.  I cannot relate to chunks of these lyrics on so many levels, but even I can admit it is cute to hear a mom coo and gush over her newborn.  This is helpful to know because some of these songs are so clean they squeak.  A great love song does not have to be the sonic equivalent of a softcore porn vignette — not that you would ever know that from listening to the chart-topping, overheated dry-humps passing for declarations of undying love these days — but love is a burning ring of fire and there should still be some heat in one form or another.  Some of these words would induce cringes in the context of lovers, but are perfectly suitable for describing feelings of maternal love.

Pierre Marchand, most famous for his work with Sarah McLachlan, produced the set.  The pairing works.  Nash and McLachlan have enough similarities that he can reach into his bag of sonic tricks and find some that work.  They are different enough that Blue on Blue never sounds like cut-rate Fumbling Towards Ecstacy leftovers.

Blue on Blue is, for the most part, a cute, happy pop record.  It is not angry or angst-ridden and only occasionally plays with a discernible edge.  It is light in mood, but still has weight.  It has weight, but never weighs you down with oppressive gloom.  There are tender ballads mixed in with the catchy pop songs.  Blue on Blue sounds like the last days of spring and the first days of summer: warm, breezy, sunny, and calm.

This cannot bode well for me.  A writer friend once dubbed me a "bastion of cynicism."  My mother still tells people my favorite cartoon characters were Oscar the Grouch and Yosemite Sam.  She still calls me Eeyore on occasion.  I should not like this record, but I do.  I shudder to think how many years of therapy are in store for me.  I find a record that makes me feel better without having to first make me feel worse and more than half of it is about motherhood!  Either Leigh Nash is that good or my wires are getting crossed and there are more voices in my head than I thought.  Bet on both and take a chance on the record.