Review: Louisiana Red & Little Victor - Back To The Blue Bayou

The 77-year old Louisiana Red is only getting better...

Louisiana Red (born Iverson Minter) had a busy year.  The 77-year old bluesman recorded two albums, both in contention for some serious hardware at the 2010 Blues Music Awards. He teamed with Little Victor and a host of other top musicians for Back To The Black Bayou, an album nominated for Album Of The Year. 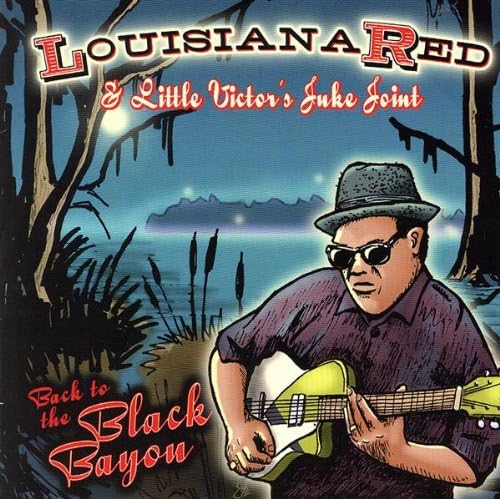 Little Victor rounded up some crack musicians and booked time in a studio designed to take everything we've learned about capturing sound in recent years and ignoring most of it for this project.  The facility they used in Norway includes the '60s Auditronics mixing console formerly housed in Memphis' Stax Studio where  timeless records were born.  Of course Red is such a powerful force you could team Jacknife Lee (On A Pogo Stick) and the legion of Hell responsible for those awful Lady GaGa records, put them in a state-of-the-art studio, and the results will still be  gritty and hard. The levels would suck and the mastering would be way too damn loud proving nothing is foolproof, but all the studio tricks designed to smooth and perfect and homogenize can't silence greatness.  The medium used to capture the sound is irrelevant because indomitable authenticity flows through Red's music, poured straight from his soul.

Back To The Black Bayou opens with "I'm Louisiana Red."  He's recorded this theme song of sorts several times throughout his career.  Re-recording old songs can be a recipe for disaster and disappointement, giving the impression the well has run dry.  This performance is no retread, though, as Red sounds as vital as ever and Little Victor and harp ace Kim Wilson crackle.  Red's delivery might be off-putting to modern listeners like Nick Jonas, accustomed to auto-tuned singers and other studio enhancements, but it comes from a pure place so deep in the soul it can't be seen, only experienced.

"You Done Quit Me" was done in one take.  Listening to it, it's hard to imagine why they'd have gone for a second.  It's possible there's something they could have improved but damned if I can figure out what.  There's a distinct "On The Road Again" vibe at the heart of this one (Canned Heat, not Willie Nelson).  Bill Troiani walks that upright bass and Bob Corritore — another blues harp veteran who guests on the record — smokes, playing some dirty, underworld sounds.  Those of Red and Little Victor create great racket as their guitar lines clang and rattle against one another.

Red howls "Crime in Motion" and shuffles over a killer performance of the rhythm section of Troiani and Alex Pettersen on "Ride On Red, Ride On."  The rhythm section, complemented by the piano of David Maxwell, gives "Alabama Train" a Latin-flavored shake.  That mystical spirit found in the music of Santana is underscored by Corritore's spooky harp and some great guitar interplay between Red and Victor.

The instrumental interplay and the ambiance created by the vintage recording approach are fantastic and  add to the enjoyment of the record, but they aren't the nucleus.  This is all Red: his voice, his cadence, and the reservoir of spirit and soul, and the way he taps into it never sounding like he's going to run out, but giving so much you can't imagine there could be any more.  This isn't Chicago blues, Memphis blues, Texas blues, soul blues, or jump blues.  These are Louisiana Red blues and while he played with and learned from many  masters throughout his career, there is no  school or style that teaches what he does.