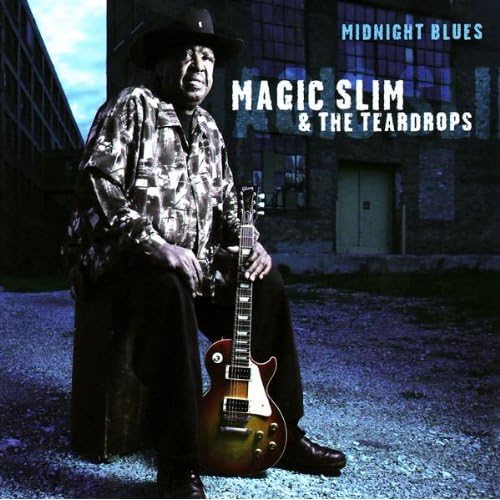 One of the things I love about the blues is the tradition of the music. Some genres place a premium on innovation and progression and that's great, but one of the unintended consequences of that emphasis is that a lot of great, veteran artists get pushed out of the way. Pop music is probably more guilty of this than any other genre. There's such an intense drive on the part of the industry and listeners to find that next big thing that some great artists are discarded and forgotten about, often long before they've run out of ideas or things to say. That doesn't happen with the blues. There is no mandatory retirement age.

This year we've already heard great releases from Buddy Guy and B.B. King — 72 and 83-years old, respectively. There aren't a lot of pop stations that would even consider playing a single from a 70-year-old artist, but the blues doesn't discriminate. It's something Keith Richards has pointed to when asked when The Rolling Stones are going to retire. Looking at it from that angle, the 60-something Stones are just getting warmed up.

The same is true of the great Magic Slim. At 71, he is still just a kid and it sounds like it on the Nick Moss-produced new album for Blind Pig Records, Midnight Blues. Where some producers obsess over science and sonic fidelity, Moss's producing style emphasizes live performance. His unobtrusive method allows him to capture the magic in the moment. He understands that a bluesman is a vessel, channeling the blues from a deep source because he is a great bluesman himself. Delivering the blues means putting the fewest possible obstacles between the artist and the listener. Midnight Blues isn't much for fancy sounds or fussy knob twiddling. Thank God for that!

Relying mostly on shuffles and boogies, Slim and his Teardrops find their groove early and often on this set of 13 loose, rollicking covers and originals. It's easy to imagine the band opening one of their legendary live shows with the instrumental "Full Load Boogie." For that matter, album opener "Let Me Love You" would also set the tone for a great night if it were used to open a show. Maybe it's because he produced it, but Slim's opening lick sounds an awful lot like Moss on his Play It 'Til Tomorrow CD. I'm not suggesting Slim knicked Nick's lead or that he'd need to but there is something in the sound and style of the opening lead that reminds me of Moss, and that's not a bad thing!

Neither Moss's production nor the fantastic guests and friends who contribute their talents to the record upstage the man in the middle, and that's worth another amen! Magic Slim is the sun, and everything else revolves around him. Joining Slim in the studio for Midnight Blues are James Cotton, Lil' Ed Williams, Lonnie Brooks, Otis Clay, and Elvin Bishop. Of all the guest stars who contribute, only the iconic Cotton comes close to eclipsing Slim with some vintage harp work on the classic "You Can't Lose What You Ain't Never Had." Cotton probably played the song a million times while working with its author, Muddy Waters. It's one of the best songs in the collective blues songbook and Slim does it proud.

In addition to some well-chosen covers, Slim contributes some excellent originals. The little run from "Carla" through "What Is That You Got" might be the strongest run on the record. "Carla" is a slow blues, full of Slim's fabulous guitar work. The shuffling "Cryin' Won't Let You Stay" finds Slim trading compact, sturdy licks with Elvin Bishop. "What Is That You Got" is the longest song on the record at just over five minutes, and Slim's guitar work is a dominant force for every one of them.

Let me give you some listening advice for Midnight Blues. Volume. Lots of it. The first two times I listened to it, I did so at polite, non-eviction sound levels. The third time through the record, I listened to it on my iPod. A slip of the hand when trying to shift from one track to the next ratcheted up the volume, and I felt like I was hearing the album for the first time again. This is not pleasant background music! If you want to feel the Midnight Blues you have to hear them, so turn this up! It really does make a difference.  Maybe mandatory retirement age is a good thing in the pop world, but Midnight Blues is another powerful case for the blues not to follow suit.