Review: Mannish Boys - Shake For Me

Too many cooks in the kitchen? 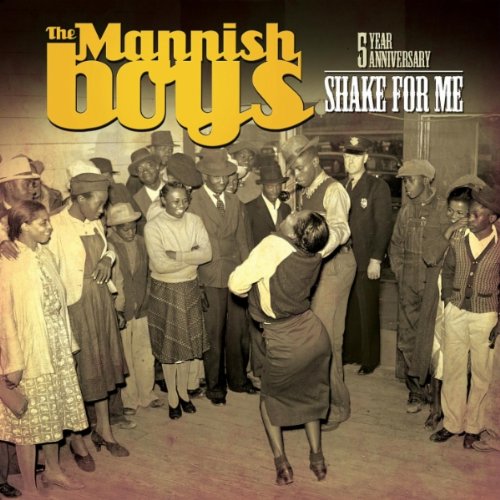 The Mannish Boys put the cliché that too many cooks can spoil the soup to the test on Shake For Me. There are seven different vocalists, three guest harp players, an army of guest guitarists, and a horn section. The album is surprisingly cohesive in light of the army that created it; the downside to all those cooks in this one kitchen isn't bad soup as much as there's a little too much of it.

As for the recipe, Shake For Me sprinkles a few originals among a slew of well-chosen covers by luminaries like Muddy Waters, Howlin' Wolf, Ray Charles, Bo Diddley, Little Walter, Lowell Fulsom, and Otis Spann. You eat well when good cooks have good ingredients to work with and Shake For Me mostly lives up to that.

Finis Tasby sings lead on four cuts including "Too Tired" and "Last Night." His laidback delivery is perfect for Ray Charles' "Last Night," played here like a quiet, nocturnal piece that tells the tale of that first morning after a lost love. It's one of his finest vocal turns on the album. Guitarists Kirk Fletcher plays quiet lead fills for the right ear as Frank Goldwasser fills the left with what feels like an amplification of Willie J. Campbell's upright bass line. Rod Piazza's guest harp is mixed front and center and when these elements are combined, it feels like being transported to a 1940s nightclub in Los Angeles. That West Coast nightclub blues sound is present "Too Tired," with a swinging rhythm and horn section, but Mike Curran's lead guitar has a sharper, thicker tone that brings mess and menace.

"The Bullet" is a stylish calling card for the band, an instrumental that leaves room for the different players to shine without collapsing under its own weight. A light, jazzy quickness characterizes the first of two Kirk Fletcher guitar solos, with Nick Curran's guitar sandwiched in between the two. In addition to the three guitar solos, Fred Kaplan gets a brief turn out front on piano- even drummer Jimi Bott rattles off a brief series of slick fills. "Big" Pete van der Pluijm sends the album off on a high note with a great, extended harp solo

Beyond those highlights, there are solid performances on tracks like "Educated Ways," "Number 9 Train," and "Hey Now." I like Lowell Fulsom's "Reconsider Baby" but he wrote a lot of other great tunes and I wish bands would give one of those try. Mannish Boys turn in a fine performance of this over-performed standard.

The excess of Shake For Me isn't in the obvious form of swollen song lengths and too many mindless solos but in the 16 songs themselves. This needed to pared back because while it's cohesive for an album of this many songs and players, the cumulative weight drains the overall impact and makes individual moments less memorable. Shake For Me is a good, consistent listen but too much of a good thing prevents it from being better.