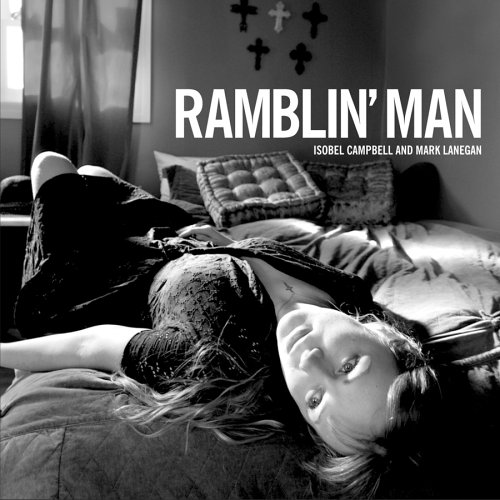 Former Screaming Trees frontman-turned solo artist Mark Lanegan and Isobel Campbell formerly of Belle & Sebastian have united for an album and have released Ramblin' Man EP as a preview of what's to come. The title track, "Ramblin' Man" is the first song on the EP. It is a cover of a Hank Williams song. Isobel Campbell said it is "quite nasty" and that it could work well in a Quentin Tarantino movie. She is right. The reference to a Tarantino film is one I made when I reviewed Lanegan's solo album of covers, the brilliant 1999 release I'll Take Care of You. "Ramblin' Man" would have been right at home on that album.

Their arrangement of "Ramblin' Man" pits his voice against hers. Campbell's hushed vocals act almost like an effect or another instrument in the mix. Instead of a piano or another guitar line, Campbell sings a counter melody to Lanegan's lead. It is not easy to decipher what she is singing as her voice is mixed to the back but it adds sultriness to the song. Rustic drum sounds, Western-sounding electric guitar lead, a whistle, and rhythmic whip crack provide terrific accents.

The star of this track is Lanegan's voice. There might not be a voice still alive better suited for this song than his (Johnny Cash, and of course Williams his ownself would have been up to the task). There is nothing mannered or fussy about the way he approaches the song. His voice exists for songs like this and songs like this exist for his voice.

The second track on the single is also slated to be part of Ballad. "(Do You Wanna) Come Walk With Me?" is a gentle, acoustic duet between Lanegan and Campbell. The vocal arrangement is more traditional as they sing together rather than against one another. Either Isobel Campbell has a dirty mind or I do for misinterpreting an occasional phrase. "(Do You Wanna) Come Walk With Me?" is either a gentle, platonic love ballad or it is an invitation to something more unseemly. I will leave that to your imagination.

This track like its predecessor is brief, lasting barely more than two minutes with acoustic guitar and strings providing the musical backdrop for Campbell's voice (Lanegan is again absent). Where "Revolver, Pt 2" had an airy, less substantive vocal sound and there was less to the music it seems to be the more completed musical idea of the final two tracks.