A fine collection that’s both timeless and true... 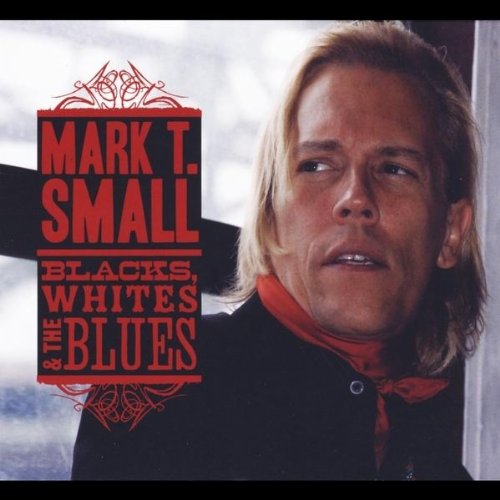 Mark T. Small’s Blacks, Whites & The Blues is one of those collections that raises a lot of questions.

Why, for instance, do so many singer-guitarists decide to go it alone, and assume they have something to offer that others will want to listen to? And why, oh why, do modern interpreters insist on covering tunes that are dated to a point where they’re, lyrically at least, remnants of a long-vanished past?

And then there’s the third question – should any of this matter, when the music’s good?

Mark T. Small’s story is familiar. Front man for a modestly successful working band, he eventually opted to ‘return to his roots,’ pursuing a solo career as a primarily acoustic artist. Small’s roots, though, are more ‘authentic’ than most; he’s been playing guitar for over forty years, with a background in both bluegrass and blues – influences range from old-timers Doc Watson and Normal Blake to Junior Wells and Charlie Musselwhite (Small also plays harmonica, though there’s none to be found on this particular collection).

All of which makes for an impressive pedigree – so far so good. And he’s got the chops, both vocally and instrumentally, to pull things off and keep them interesting throughout the fourteen tracks on Blacks, Whites, & The Blues. His guitar work is fleet and agile when appropriate, and crunchy and driving when the situation demands a more percussive approach. For those with a technical interest, he lists the various guitars used on each track – most are acoustic, but he hauls out his trusty telecaster for a cover of John Lee Hooker’s “Bang Bang Bang Bang.”

And while his voice isn’t the most remarkable of instruments, he sings well, with a convincing hint of menace on darker material (“Bang Bang”) and a pleasant lilt on gentler fare (traditional “Old Gray Mare” and “Six White Horses”). In short, he knows how to work with what he’s got, and while there’s no shortage of passion and intensity, he’s wise enough not to try too hard.

Small writes that, while he loves playing in a band setting, going solo gives him the freedom to explore each song as it unfolds, in the moment. And yes – Small is a talented musician well worth listening to, and everything about Black, Whites, & The Blues, from performances to production, is first-rate.

Which brings us to the material. Small wrote just one of the disc’s fourteen tracks, but he manages to make the familiar fresh. Opening with Muddy Waters’ “Trouble No More,” he travels traditional paths with a pair from Mississippi Fred McDowell (“61 Highway” and “A Few More Lines”), and standards from the likes of Willie Dixon (“Little Red Rooster”), the aforementioned John Lee Hooker, and Robert Johnson (“Sweet Home Chicago”). The songs are lyrically dated, to be sure – “Hesitation Blues,” first recorded as an instrumental in 1914, includes the line “I could live off of the chickens / In the rich folks’ yard”. Not too many people, rich or poor, keep chickens in the yard anymore. But taken as a metaphor for the tough times we’re currently going through, the song remains relevant. And Small never seems to be dwelling in the past; this isn’t an exercise in nostalgia. His energy and sincerity are far too convincing for that. The details might change, but hard luck and hurt are still with us, still the stuff we deal with every day.

And so we come to the most important question of all – does the music stand up on its own? Given that it’s all been done before – is there any reason to seek out Small’s versions of tunes that have been recorded hundreds of times? The answer is an emphatic yes – Small is a superb guitarist and a fine vocalist, but most important, he brings the material to life. From his clever blend of rhythms on “Trouble No More” – listen closely and you’ll also hear hints of “Smokestack Lightnin’” – to his re-invention of “The Thrill Is Gone” – he invests each tune with expressive urgency that’s as immediate as today’s headlines. In Small’s hands, these songs breathe and sweat and cry just as much as they did ‘way back when.

Sure, it’s all been done before, and yes, there are a lot of collections similar to this one. There aren’t many that are better, though.