A solidly crafted album with some good tunes and wicked licks. 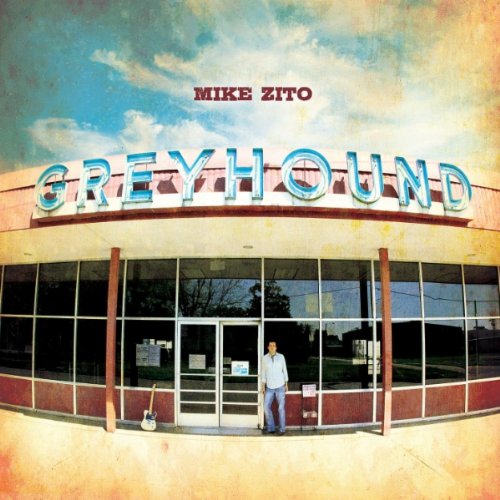 Mike Zito's Greyhound is the followup to his 2009 Pearl River, the title track of which took home the Blues Music Award for Song Of The Year. He teamed Anders Osborne, a terrific singer/songwriter in his own rite (love his American Patchwork CD) but someone who is increasingly embracing the role of producer. In addition to Zito's Greyhound, Osborne also produced Louisiana bluesman Tab Benoit's Medicine, released earlier this year.

Artists and their publicists routinely claim a new work is the most personal from the artist to date, whether it's actually true or not. The liner notes don't explicitly say that but the implication is there; this isn't just another set of bluesy, Southern-rockers. Greyhound may not be an audio autobiography and it's not a concept album in the tradition of plot-driven narratives from '70s prog-rock, but there is an overarching theme and nearly every song reflects it.

This is an outlaw, renegade blues-rock album. The central character – in many cases we can presume it is Zito or someone very much like him – may not be leaving a trail of bodies in his wake following a string of unspeakably violent acts but this album is very much about a man on the run. The person or people in these songs feels chased from place-to-place, compelled by something to flee. There's also a sense of an obstacle – something or someone – standing in his way whether he's coming or going. There's a lot to be said for a cohesive vision for an album but there's a fine line between cohesion and overkill and Greyhound straddles it. Look at the titles of these songs: "Roll On," "Judgment Day," "Greyhound," "The Hard Way," "Stay," "Motel Blues;" motion and facing long odds is woven into the album's DNA.

"Roll On" opens the set and introduces the theme with a hard-edged riff and some of Zito's familiar slide guitar soloing. The title track follows; if "Welcome To The Jungle" was about Axl Rose leaving his home and arriving in Los Angeles in pursuit of a title shot, "Greyhound" is Mike Zito's story. They aren't the same story but they share certain characteristics.

The album can almost be split into a Side A and Side B, just like in the days when vinyl ruled the chart. "Side A" is (mostly) the blues-based, Southern rockers while Side B is home to the ballads and midtempo cuts. That theme of a running man looking for an escape cuts across both halves of the album.

"Motel Blues" is the first of the tracks that take the album in a different sonic direction, an acoustic number with no percussion and some softer slide work. "Stay" is also built on acoustic chording but has a full-band sound. "Stay" offers another perspective on the theme, not displaying the same restless eagerness to ramble and run. Our "outlaw" runs because he has to, not always because he wants to.

Zito's vocals and guitar walk the same thin line as the theme of Greyhound itself. He's a solid vocalist and a gifted lead player but there is a sameness in tone and attack, whether you're referencing the harder first half or comparatively soft latter portion, at times blunting the impact. It's not easy to ingest as a whole even though it's clearly intended to be heard that way but Greyhound remains a solidly crafted album with some good tunes and wicked licks.