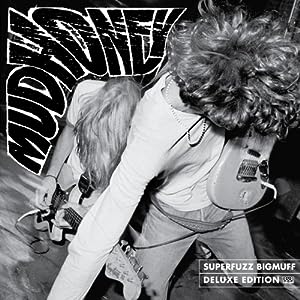 Wow, is this bringing back... memories? No, it's something more than that. It's bigger than a handful of memories. This is a fuckin' time capsule inside a time machine. I can feel my hair getting bigger. I can feel the concrete floors beneath heavy boots. I can smell the sweaty flannel and it's just as scratchy as I remember. I can taste the flat, cheap beer in sweating plastic cups.

My family moved to Washington state in 1988 and we moved to Alabama in '91. I lived in the Seattle area when what would become known as "grunge" belonged only to "us." Not long after we landed in Huntsville, Nirvana happened. It was like the best part of Seattle followed me. I'd love to tell you I knew all these bands before they became big - but I didn't. I knew a few of them, though, and I hung out with a lot of people who were on that cutting edge. I truly believe having lived among the people who created and first embraced the music helped me connect with it in a special way, even from 2,000 miles away.

SubPop's release of a 20th anniversary edition of Mudhoney's classic EP Superfuzz Bigmuff is here to remind me I can now add 20 years (and 200 pounds) to those 2,000 miles. I'll let you in on a little secret: 20 years feels a hell of a lot more distant than the 2,000 miles ever did (and let's not talk about the girth). Where did it all go? How did it happen? When did I become that guy? It doesn't feel that long ago that I was laughing at how preposterous and old Neil Young looked playing alongside Pearl Jam on the MTV Music Awards. Times have changed. I still don't like Neil Young, but Eddie Vedder and I are now closer to Neil's age then and I can't find anything all that funny about it.

Superfuzz Bigmuff was an EP when it was first released, but 20 years on this EP has been expanded into a double-disc collection. I guess I can take comfort in the knowledge that age has bloated more than me. Actually, that's not fair. Superfuzz carries its weight much better than I do. Superfuzz isn't fat, it's big-boned.

The first disc is, in some ways, oddly assembled. Typically with this kind of re-issue, the album proper is the first thing you hear and additional cuts are appended to the end of that first disc and the second disc. That's not what we have with Superfuzz Bigmuff.

Instead of putting the six songs from the original EP at the beginning of the first disc, they are sequenced down and the music is presented chronologically. It's a reasonable approach, even if it does seem to downplay the EP being celebrated for having withstood the test of time. I'm not crazy about the sequencing, but the decision is justifiable. It's still a great listen regardless how it's ordered. iPods and MP3 devices will allow fans to easily sequence the album in a manner of their choosing anyway.

The inclusion of such early singles as "Touch Me I'm Sick" and "Sweet Young Thing Ain't Sweet No More" bolsters the power and pedigree of the package, but it probably doesn't enhance the value. Unless this deluxe edition is the first Mudhoney title you purchase, you're going to have those songs as well as "Hate The Police." They fit with the original EP chronologically and sonically, but how much they really belong here is debatable. Adding them to the first disc turns it into more of a "Best Of" package than a celebration of the original group of songs, and is it necessary to round up a band's best songs from essentially a two-year window?

Marketing strategies and gimmicks aside, Superfuzz Bigmuff has never sounded so good. The music on that first disc retains all the power it ever had and this is one of the rare instances of late where remastering is a plus. Bill Inglot and Dan Hersch present the music in better fidelity — much better fidelity in some cases — than was previously available. That they've done this without killing the soul of the original is a rare treat in this Loudness War-era of music. Mudhoney didn't need ProTools. They were the loudness war back when that meant annoying your parents unleashing a torrent of passion and energy rather than cheap studio trickery.

The second disc of the EP features vintage live recordings of two Mudhoney shows. The first nine are taken from a show in Berlin, Germany from October of 1988. The second six are from a live radio performance the band did in Santa Barbara in November of that same year. Of the two live sets, the Berlin is the more interesting if only because the fidelity of the recording is considerably better. It's great to hear this era of the band in the live setting.

It's easy to forget how much great music came from the Pacific Northwest in the late '80s and early '90s. It's only fitting that one of the indie labels who helped introduce so many to that wonderful music would be out front to remind us.