Yes, we are late to review one of the most downloaded records ever. 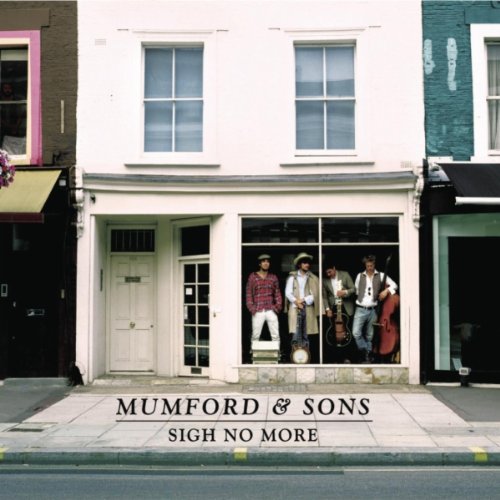 We’re not sure how it happened, but with all of the great new music being reviewed around here we somehow missed talking about one of the biggest albums of the year – well, technically of last year. Sign No More, the debut studio album from England’s Mumford and Sons, was originally released in the US on February 16, 2010. Despite a release date that was roughly 17 months ago, Sign No More currently holds the #3 album spot on the iTunes charts and is the 10th most downloaded record of all time.

So how is it possible that we missed this “little” record? Well, I can only speak for myself on this. I didn’t miss the record – I just don’t think I was as mowed over by the Mumford movement as the rest of the world has been. The first time I heard Sigh No More I found the Mumford sound to be quite familiar- an acoustic folk-rock sound filled with ethereal two and three part harmonies, haunting voices, and a gamut of different instruments. I immediately likened the sound to that of bands I’ve been following for years like Fleet Foxes, Old Crow Medicine Show, the Avett Brothers, and so on. Think of almost any band with a stand up bass, a killer banjo player, and maybe an odd new musical instrument (ala the donkey jaw played by Suz of the David Wax Museum). I guess I just didn’t get Mumford Madness quite like the rest of the world.

I will say, the Mumford mania is sucking me in... little by little. “Little Lion Man” and “The Cave,” the first two singles from Sign No More, are catchy, very radio friendly, high energy tunes. And Mumford’s Grammy appearance, including a performance of “Maggie’s Farm” with Bob Dylan and my beloved Avetts, was mind-numbingly good and probably enough on its own to make anyone a Mumford fan. After seeing that energetic performance one almost sees Sign No More in a new light. You can appreciate the musicianship and vigorous spirit of the Mumfords as yet another entry into an Americana-Folk-Rock genre that is really starting to get some legs in a music scene so often dominated by R&B, rap, and pop music. A fan of bluegrass and folk music for years, I’m thrilled to see banjos getting some prime time on the iTunes charts.

In April, Mumford and Sons set out on the Railroad Revival Tour, traveling the Southwest exclusively in vintage railcars – with Old Crow Medicine Show and Edward Sharpe and the Magnetic Zeros. One can only imagine what those six shows (not to mention countless hours spent in the 15 traveling rail cars) must have been like. From what I’ve read, it was basically a 2,000 mile long jam session from guys that can pick up just about any instrument and make something magical.

Lyrically, Mumford and Sons seems to be inspired by literature. After all the lyrics in the song “Sigh No More” are nearly a direct quote from a Shakespearian romantic comedy:

One foot in sea and one on shore” - Balthasar Act 2, Scene 3 Much Ado About Nothing

“Sigh no more, no more
One foot in sea and one on shore
My heart was never pure
And you know me
You know me” – “Awake My Soul”

Mumford and Sons are now back in the studio, promising a new studio album this year. They are also set to appear on forthcoming Ray Davies (of the Kinks) collaborations record. Can’t wait for new music from the Mumford crew? Here’s a link to a new song “home/untitled” performed live on KBCO: Mumford and Sons "Home"