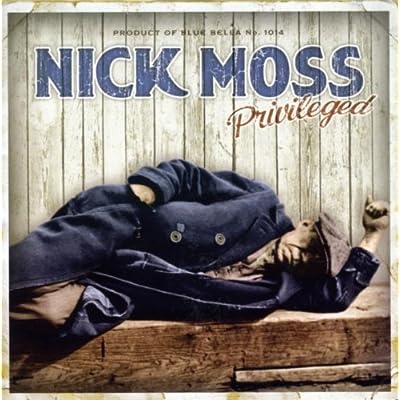 Nick Moss decided it was time for a little change with his eighth album Privileged.  The traditional Chicago blues sound of his previous efforts can still be heard but it is the jumping off point instead of the destination.  Muddy Waters famously named rock and roll the offspring of the blues in one of his songs and Moss has now traveled that same road.

This isn't a pure rock and roll record but Moss and his bandmates have cranked the volume just a little louder and rock their blues just a little harder, drawing inspiration from great bands of the '60s and '70s who did the same thing.

Privileged opens with the baptism of fire that is "Born Leader." It's an ideal choice to open the album as it establishes a sonic and thematic tone repeated throughout the album. It is a forceful opening salvo that hits like a clenched fist. Everything about it is ferocious. Moss is serving notice, lyrically and musically. "Born Leader" is a statement of purpose, playing like a cagey middleweight fighter, quick on its feet but with devastating knockout power.

No names are mentioned nor party affiliations declared but he's clearly had it with the politics of the empty suit willing to say anything to get ahead. It's a message both timely and timeless. The sad truth is songs of war and crooked politicians never really go out of style. If history has taught us anything it is that there will always be another. So what's an artist to do? What's a man to do? You speak out and ring the bell of discontent. You remind the "Born Leader" they govern only with the consent of the governed and hold their feet to the fire by unmasking them in a torrid inferno of guitar and contempt.

Those ideas are revisited in "Privileged at Birth" as well as his cover of Cream's "Politician." "Privileged at Birth" stretches out past seven minutes powered by a great organ break by John Kattke and a sweltering guitar solo by Moss who sounds liberated by the chance to rock out.  The "Privileged At Birth" solo is one of the best not only on the record but stands out among the many he has commited to tape in his career.

Moss' "Politician" doesn't stray far from the basic structure of the original but there are differences. Eric Clapton layers his guitars and the timing and rhythmic structure are a bit off-kilter, playing towards the more complex, psychedelic side of Cream's personality. Moss' take is all intensity and attitude, causing the original to feel restrained by comparison. It's not a put-down of the classic original; Moss has approached the song differently and his more confrontational sound fits with the rest of the record. Moss' lead guitar is bigger and his vocal more forceful. There's a sinister swagger in the way the band attacks; their confidence and commitment are audible in every note. There is evangelistic fervor and furor coming from the band and a real crunch and sting in the guitars.  "Politician" combines with "Born Leader" and "Privileged At Birth" to form a core for the album, a musical State of The Union address.

"Tear 'Em Down" fits nicely alongside that core without speaking specifically to politics or current events. "Team 'Em Down" is a more philosophical meditation on the human bloodsport of building people up with the seeming express purpose of later tearing them down. It clocks in at nearly eight minutes and Moss knows precisely what to do with each and every one of them. Fans who have supported the band because of his lead prowess will find plenty to like here and on "Your Love's A Lie." On the latter Moss returns to the subject of love gone wrong, a topic common throughout his blues work. The playing also changes. The fantastic solos on "Your Love's A Lie" are deeper and more personal. The album closes with the mandatory, essential Nick Moss instrumental, "Balognious Funk." As the title implies, Bob Carter drops a funky beat while Gerry Hundt and Stumpy Hutchkins create a colorful rhythmic background for Moss' searching leads to explore.

Priviledged is a dynamic, towering achievement whether it's the start of a new direction or a brief diversion along his established path.