A rare sequel that equals and exceeds the original... 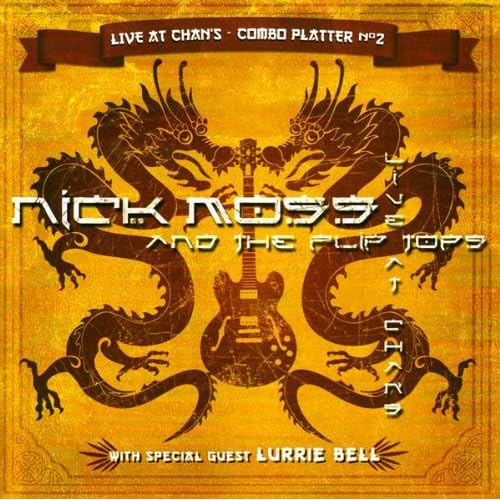 There have been a lot of film and literary sequels and most of them suck. Sometimes it's because the idea or premise of the original was so completely terrible that a second or third serving can't help but suck out loud. Some sadist in Hollywood green lighted not one but two Duece Bigelow films. I wanted to make a joke about the Halloween franchise but I couldn't comprehend the litany of sequels, prequels, and re-makes to even attempt one.

As for music sequels, there just haven't been as many. You have your Meatloaf Bat Out of Hell trilogy. Metallica turned "The Unforgiven" into a trilogy. Queensryche followed up their classic concept album Operation:Mindcrime with a sequel and Peter Frampton came alive twice. Kiss went Alive four times. It's been done but if this were Hollywood you bet your ass we'd have a Thriller 2 and a Back To The Dark Side Of The Moon. I guess the Duece Bigelow equivalent would be More Chocolate Starfish & Hot Dog Flavored Water and Continuum II.

So Nick Moss & The Flip Tops have come out with a sequel Live at Chan's in the form of Live at Chan's: Combo Platter 2. It worked pretty well the first time as Live at Chan's was critically acclaimed and a 2006 Blues Music Award nominee for Album of the Year so we know we're not dealing with Duece. So is Combo Platter No. 2 a delicious new entree like Godfather II or are we talking reeking leftovers in a styrofoam container like Godfather IIII? Moss & The Flip Tops answer that question quickly, opening with the simmering instrumental "Spareribs & Chopsticks."

On "Spareribs," Bob Carter's drumming is perfect punctuation to Moss' searing, expressive phrasing. Carter deftly places exclamation points and periods at the end of Moss' runs and provides the commas to connect and hold them together. He doesn't do it do it with flash or excess, but with ease. One after another, Carter rolls off tasty fills that do more than simply keep the beat. It's easy to fixate on the lead guitar but Carter, Gerry Hundt, and Willie Oshawny are the launch pad that allows their leader to fearlessly and brilliantly soar and explore. It seems impossible that the album can get any better and "Spareribs" is a definite highlight, but these guys are only getting started.

When Moss steps to the mic to contribute vocals as he does on three of the next five tracks, it's clear his guitar and voice are central to the sound. It's equally obvious that this is, in every sense, a band effort. Moss' confidence in his own abilities fuses with his well-placed faith in those of his band and then magic happens. On the album's third cut, "The Whiskey Makes Me Mean," Hundt takes a break from his bass and passes the harmonica over to Moss, stepping out front on vocals with his mandolin.

When Hundt sets down the bass, it's often Oshawny who picks it up. Tonight he stays focused on keys as Moss' wife, Kate, ably handles bass on several cuts. That doesn't mean Oshawny doesn't get a chance to change things up, though. On "I Got All Kinds Of Love," he does a little Sunnyland Slim and switches from piano to organ. All the while, Carter stylishly keeps the beat without calling too much attention to himself.

Even though the risk of a stale sequel was low, Moss & The Flip Tops came armed with a secret weapon in the form of Chicago blues royalty Lurrie Bell. Bell takes lead vocals for the next three songs, beginning with a rollicking cover of "Don't You Lie To Me." Moss and Bell don't sound like they're warming up as they trade solos but clearly take things to another level on a scorching 13-minute cover of Eddie Boyd's classic "Five Long Years." The braggadaccio of Willie Dixon's "I'm Ready," popularized by Muddy Waters, is roughed up a little bit and given some grit. Moss takes vocals one last time before the night is over on "I Wanna Know" with Moss and Bell again trading solos.

It is an exhilarating and important example of traditional Chicago blues played in a contemporary environment without sounding like, well, a sequel or a bad cover version. They blaze an exciting trail on their own and can turnaround follow a legendary leader like Bell without missing a beat. Nick Moss & The Flip Tops are both original and authentic, and Live at Chan's: Combo Platter No. 2 might be the finest example of that to date.