Review: Nick Moss & The Flip Tops - Play It 'Til Tomorrow

"Play this motherfucker 'til tomorrow..." 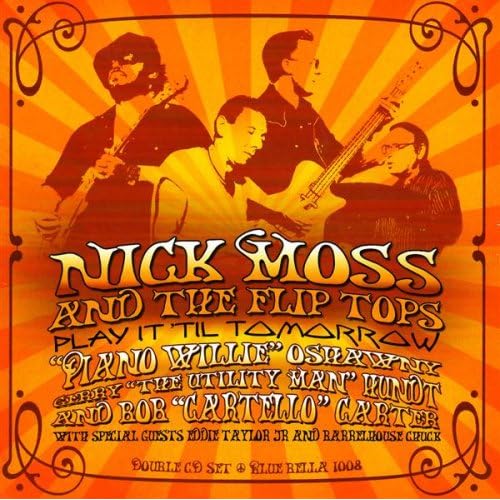 Digesting double albums can be daunting, and most would be better off as singles, but Nick Moss makes the task easier by not making a double album so much as packaging two single albums together in the form of Play It 'Til Tomorrow. Taken one at a time, both discs are a pleasure to listen to. The first features the familiar electric Chicago blues he has explored on his previous albums while the second is acoustic, showing a side of his playing rarely before heard.

The electric disc is the stronger of the two. The material is better and the band sounds more comfortable in the familiar environment. Don't let comfortable and familiar delude you into thinking the electric cuts are soft. "Late Night Saint" opens the album and accidentally gave the disc its title, as you hear on the hidden outtake at the end of the first disc. Guest rhythm guitarist Eddie Taylor Jr. adds muscle to this rocking, roadhouse blues and gets so deep in it he proclaims, "I could play that motherfucker 'til tomorrow!"  The song is so good you almost wish they would, but these guys are only getting warmed up.

Taylor supplies rhythm on several tracks, another of which is the stellar "Mistakes From the Past."  His understated rhythm fills just enough space to secure the frame for some of Moss' most smoldering playing on the album.

Two of the album's finest moments come at the end of the first disc. "Too Many Miles" is a down and dirty blues that snaps, bites, and struts with a harmonica tone out of Stevie Wonder's "Isn't She Lovely" cutting across the chaos. "The Rump Bump" is a driving instrumental that allows Moss to flash a few of his finer licks. A six-minute instrumental might seem indulgent in principle but it never becomes a chore because the ideas are fresh and the execution sharp.

That the electric set has an edge over the acoustic program – or the Smithsonian set, as the band calls it – is a complement to the electric, not a slight to the acoustic. This Smithsonian set gives the multi-instrumentalist Flip Tops an opportunity to shine. The interplay is wonderful and more obvious on these songs, but it's hard not to miss the powerful leadwork Moss provides.

There's really only one knock on this album and it's debatable whether or not this even qualifies. The unfussy, DIY aesthetic of this mostly live, in-studio recording has its charms but it also has its drawbacks. There is a sameness to the sounds – not the songs, but the instrumental tones – that can wear down a listener over the long haul. The blues should always have a little mess and chaos and there is plenty of that on Play it 'Til Tomorrow, but just a little polish and precision would give the individual songs more individual character, and these songs deserve that. It's a minor complaint, which is what happens when great material is crossed with masterful musicianship; there's not much left to notice after that.

If my endorsement and the great price for this 28-song set doesn't move you to make the purchase, consider this: blues icon Buddy Guy and the legendary Jimmy Rogers — with whom Moss toured — are both on the Nick Moss bandwagon. Check out Play It 'Til Tomorrow. You'll be playin' this motherfucker 'til tomorrow, too.