Review: Norah Jones - Not Too Late

TheVoice stretches out on her third outing... 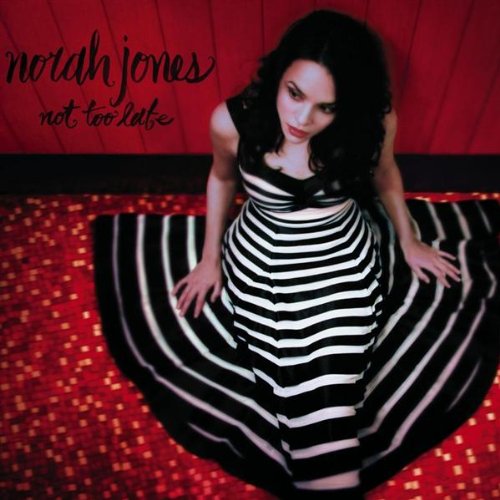 Pop music is dismissed today because it is more commodity than art.  Today's pop music is like facial tissue: we don't think about the brand, call it all Kleenex, and throw it away.  Of course the music is disposable! It's only there to provide a beat for the strip show.  I wonder which is more difficult: staying in tune while wearing clothes or staying in tune while simultaneously taking them off.  It must be the latter, as many elaborate stage performances use canned vocals.  In a world where Fergie can pass for a pop star rather than an unfortunate-looking stripper, it amazes me Norah Jones sells any records at all.  So what's the big deal?  Why should we take note of someone just because they can sing with their clothes on?  Journalism 101: it's not news when dog bites man, it's news when man bites dog.

I know what you're thinking, and you're wrong.  I'm not a 74-year old Republican who wants to outlaw the miniskirt- I'm a 30-something married guy with four beautiful nieces, my politics are my business, and there is a place for miniskirts (not on my nieces, though!).  I want to confiscate all of their Hannah Montana and Cheetah Girls CDs (and whatever appalling music they listen to these days) and hand them copies of these first three albums from Jones followed by the famous parent speech, "You won't understand today, but you will thank me down the road."

There is a place in the musical universe for songs that are fun and disposable.  I tend not to like them and while commercial success might not justify them as art, the popularity of this kind of music does say something beyond the obvious, that too many people have bad taste in music.  Fergie and her ilk will sell a ton of records today and nobody will remember it tomorrow.  There is timelessness to Norah Jones' voice that makes her music transcend the trends and the eras.  This is a voice that belongs in the same category as Etta James and Ella Fitzgerald.

There is a risk in messing with a good thing, and very few things in the decaying music industry have been as critically or commercially successful as Jones' first two albums.  The formula has changed for Not Too Late.  The legendary Arif Mardin, producer of Come Away With Me and Feels Like Home, passed away in 2006.  In addition, all 13 songs on this new album were either written or co-written by Jones herself, which probably equals her songwriting output for those first two records. Those two deviations were likely enough for some music writers to begin sharpening their knives, preparing to proclaim the 27-year old was simply a creation of a great producer or was dependent on the songwriting talents of others, incapable of providing her own material.

Of course some critics are too lazy to come up with anything new, so I am sure we'll get another batch of "S-norah Jones" reviews.  I go apoplectic when I hear people dismiss her music as being too quiet or too mellow.  That is like going to Paris and complaining that all you can find is French food.  Too mellow?  What is that?  What difference does the perceived mellowness have on the quality of the music?  Dismissals like that say more about the listener than the artist, suggesting they are unable to appreciate music free of bombast and overwrought, contrived emotion.

The first four minutes of Not Too Late were enough to resolve the issue of whether or not Jones was a capable songwriter.  The underlying sounds may be different, but the devastating heartbreak in the voice is as potent as ever.  I nearly didn't make it past the first song, "Wish I Could." It is a stunning creation.  It is not uncommon for me to lock into a single song in an almost trance-like state, which is terribly funny considering my lack of concentration skills.  There is an indefinable quality, a beauty, that hypnotized me immediately.  Listeners are immediately clued in that this will be a different kind of record as the sonic background for Jones' voice on this track is not the familiar piano, instead relying on acoustic guitar and cello.  The combination of TheVoice and mournful cello have a devastating effect.

One of this album's real achievements is the way it integrates new influences but still sounds distinctly Norah.  While some might prefer the differences were more obvious, I like subtlety.  "Sinkin' Soon" is a combination of Dixieland, ragtime, saloon, and lounge sounds.  I am not overly familiar with Tom Waits, but even I could spot that influence on this track.  Maybe I haven't listened to enough trombone music, but I don't know if I have ever heard that instrument make these sounds.  That Jones sounds so comfortable and makes this slight departure sound like a natural part of her musical environment is brilliant.

I never knew much about marimbas until I was captivated by Thomas Newman's American Beauty score.  Newman did marvelous things with marimbas, and now Jones has, too.  "You Are Not My Friend" is spare, fragile, and affecting.  The marimbas and the backwards electric guitar combine with TheVoice, hovering breathily, and the impact is ethereal.

"Thinking About You" is a great choice as a first single, as it probably sounds more similar to songs from her previous albums than anything else on this record.  Even here, though, horns and organ are added to give the sound an extra dose of sultriness (not that TheVoice needs any help in that department).  It's charming, classy, and fun.  There really is no low point on the disc, but there are other highlights besides those previously mentioned.  "Broken," and "The Sun Doesn't Like You," and album closer "Not Too Late."

Not Too Late feels like a continuation of what started on Come Away With Me.  There is a progression, yet the music on her three albums sounds like it belongs together.  There is a progression- and damn it, there is also sonic variety, so shut up about it already! The individual songs on this record stand up, but this really should be listened to in the context of a full album.  Technology is challenging the concept of the album as an art form.  Not Too Late is one more case for binding groups of songs together.

I tend to think of music in comparative terms.  When listening to an album by an artist with more than one of them, I tend to compare the sound and quality to its predecessors.  I compare similar-sounding artists and similar-sounding songs.  I am not alone in this camp.  More than one co-worker who saw I was listening to Not Too Late asked me about the album, and often in comparison to her others.  I don't know if it is the best approach for listening to music- it probably isn't, but for some reason it makes sense to me.  There are exceptions, and this is one of them.

It is a voice like hers and music like this that reminds me that beauty exists and is still being born today.  The current cultural incubator may seem incapable of nurturing it, but Not Too Late is the proof.  Is it better than her other two albums?  Is it the best album of 2007?   I can't think of anything less relevant, and no one is more surprised by that than me.