Review: Oasis - Dig Out Your Soul

No one makes hypocrisy more fun than Oasis. 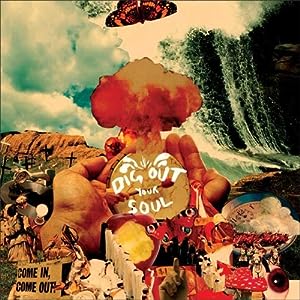 Let's take a look at the scorecard just for the recently released Dig Out Your Soul.  Noel Gallagher slammed Radiohead for their release/distribution method, but I'll be damned if Oasis hasn't copied nearly every page out of the Radiohead playbook.

They weren't giving the album away for free, but you could stream it on their MySpace page.  They also released a super deluxe box set edition complete with album, bonus disc, and vinyl.  Oasis have even taken it a step further and thrown in a DVD, and that's what makes this fun.  Noel Gallagher loves making bold, outrageous, outlandish, and downright stupid statements and then he sits back and laughs at the frenzy of it all.  He does this in the press and on album.  Nuance?  What the fuck is that?  What's the point?

I've discussed with people the idea that breaking all the rules isn't as impressive if you don't know them to begin with.  I don't know if Noel knew them all at the outset, but he knows them now and frankly doesn't care.  Not caring — like people have pointed out with the band's music — isn't new, either, but Gallagher does it in a refreshing way.  There's the punk rock, anarchist, give a fuck sort of not caring.  There's the bowl of hedonism, celebu-tard flavor of not caring, and brother Liam Gallagher certainly embodied that for a decade or so (and is still prone to it on occasion).  Noel's prefers a "have a drink on me" styled fuck off, and it's brilliant fun; you have to be pretty far up yourself to not have a chuckle at this.

One of the byproducts of Noel's penchant for outrageous quotes is that you never really know what to believe when he talks about the band's plans or directions for an album.  After the marvelous Don't Believe The Truth tour ended, he indicated he was ready to return to the days of grander productions.  Oasis burst onto the scene with Definitely Maybe and (What's The Story) Morning Glory, two record-setting releases that made huge impacts in their native Britain and the world at large.  Be Here Now's bloated ambition and elaborate production was the point where many fans headed for the exit.  Oasis spent the next two albums, Standing On The Shoulder of Giants and Heathen Chemistry, recovering from the excess.  With Truth, the band seemed on more stable ground and made a surprisingly disciplined, rewarding record.  A few years older and perhaps a bit wiser, Noel seemed ready to try his hand at the massive sound they'd attempted with mixed results on Be Here Now.  At least that's what he said.

It wasn't until I heard an advance of first single  "The Shock Of The Lightning" I realized he was serious.  Guitar feedback squall, '60s-sounding psychedelic keyboards, and droning fuzz create the sonic terrain that frontman Liam Gallagher was born to inhabit.  Having always preferred the older Gallagher, I've often found myself making excuses for Liam's continued involvement (and with some of his bizarre and boorish behavior, sometimes for his continued existence).  Every time I convinced myself the band would be better one Gallagher down, Liam would do something to give me pause.  Dig Out Your Soul is the best evidence yet of why Liam is vital to what Oasis does and why Noel needs to make the solo record he's threatened to make for years.

Dig Out Your Soul is Liam's record, pure and simple.  Sure Noel is the sonic architect and, as always, most of the best songs are the ones he penned, but it is Liam's vocal presence that shines brightest on a dense, loud record.  When most of us think of ambient music, we think of pleasant music that occupies background space.  With Dig Out Your Soul, Oasis has brought ambiance to rock.  This is not a collection of great melodies and choruses, which in and of itself is a change of pace.  The relative absence of hooks and choruses requires that something else emerge.  That something else is Liam Gallagher.

While the intro of opening salvo "Bag It Up" doesn't quite prepare you for the sonic sorcery to come, it is a strong declaration of intent and direction.  As the song concludes, the meaty riff has morphed into a mushroom cloud of sound.  "The Nature of Reality" is "Helter Skelter" meets Alice in Wonderland, with Liam as a caterpillar smoking hallucinogenics on a mushroom.  "To Be Where There's Life" mines similar terrain, but with less rock and more sitar.  I'm sure to Oasis critics and even some fans, that sounds like the worst thing ever.  I'm telling you, it's spellbinding and fantastic.  Oasis have made their "White Album," but wisely kept it to a single disc

While Liam is the star of the show, big brother left himself a star moment that rates as the album's strongest moment.  "Falling Down" may be the best full-band song Noel Gallagher has ever sung.  Yes, I'm talking better than "Don't Look Back in Anger" (okay, maybe not quite), better than "Little By Little," better than "The Importance of Being Idle."  It's stirring, yearning, and perfect.

The name Oasis is toxic to some.  There are those who won't even consider this might be a really good album.  It's their loss.  I know of two colleagues, neither considered themselves fans of Oasis (one actively disliked them), who changed their tune upon hearing Dig Out Your Soul.  Give it a chance.  You might, too.