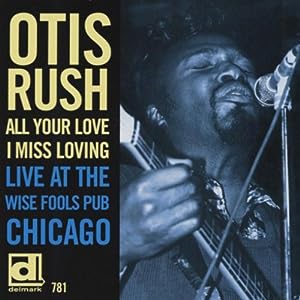 I am a big believer in the idea of putting your money where your mouth is.  I wrote a few months back about giving up my free copy of Guster's Ganging Up On the Sun, an album I declared to be the best of 2006, and went out and bought a copy of my own.  This entire series of reviews of albums and artists nominated for the 2007 Blues Music Awards can be traced back to one album:  Otis Rush - All Your Love I Miss Loving, Live at The Wise Fools Pub, Chicago (that album title is almost long enough for a U2 record).  I got out my checkbook and joined the Blues Foundation within days of learning this album was nominated for a BMA.

Someone at Delmark should get a raise for releasing Wise Fools (as well as Junior Wells' Live at Theresa's).  It is a shame the tapes of this show sat around in the vaults for so long.  This is live Chicago blues at its very best!  The sound quality is a little less than pristine and shiny but it is still excellent,  and in its own way these slight shortcomings add to the authentic feel of the album and the moment.  These days, live albums are remixed, remastered, and cleaned up, smoothing over any of the blood, guts, and intensity of a performance. Wise Fools has not been fussed over and you really have the feeling this is what he sounded like on that January night.

There is nothing particularly special about this night and that, in turn, is what makes it special.  This is not the sound of a band going through the motions to make a live album in order to get out of some record contract.  Adding to that feeling of authenticity is Rush's backing band.  Bob Levis, Bob Stroger, and Jesse Green spent many nights on stage behind Rush, and that time together established these guys as a powerful blues force.  There are no guest appearances from celebrity friends, although Alberto Gianquinto sits in on electric piano and sax players Chris "Barcelona Red" Mason and Rawl Hardman sit in at the end of the show.  This is the sound of a professional band, singing for its supper.  The band is tight, performing because this is what they do and they're damn good at it.  They didn't go to any extra trouble because they didn't have to- they weren't trying to dress up a pig.  Some backing bands demonstrate their prowess by competing for and sometimes stealing the spotlight- with or without the blessing of the star.  Other sidemen prove their worth by never bring any attention to themselves at all, by always playing the right note at the right time with the right feel.  This performance sounds like one Otis Rush and his band delivered hundreds of times and that's what makes it special, that's what makes it a fitting nominee in the Historical Album of the Year category.

This performance was recorded around the time of his studio album Cold Day in Hell, which was released sometime in 1976, presumably after this January show.  Rush, Levis, Stroger, and Green had either just finished cutting the album or would soon head into the studio.  Five of the 12 tracks from Cold Day were performed for Wise Fools, including a re-recording of his classic "All Your Love (I Miss Loving)."  Missing from the set is "I Can't Quit You Baby," a Willie Dixon-penned song he made a hit well before Led Zeppelin, but there are many Rush live albums that do include it. It is not terribly missed here, even though it is a great song that he performs well.

It is tough to choose highlights when there are no low spots, but I have some favorite moments.  His cover of B.B. King's "You're Breaking My Heart" is fabulous.  The version from Cold Day in Hell is good, but there's a little more fire in this live version.  "Mean Old World," another song from Cold Day, features the signature stop/start riff he used countless times on various songs.  Rush rarely toured with a piano player, likely due to the expense of another mouth to feed and the added equipment, but this show was recorded at home in Chicago.  As such, Gianquinto's electric piano helps this stand apart from other Rush live sets and is particularly effective on "All Your Love (I Miss Loving)."  For pure guitar power, the fiery solo on "It Takes Time" and "Motoring Along," the instrumental closing track both stand out.  Overall, this and So Many Roads: Live in Concert are the definitive live albums in Rush's catalog.  No blues fan should be without either.

I went into my exploration of the blues a virtual blank slate.  I knew a few names, I knew a few songs from having heard them covered by rock artists inspired by the originals.  Beyond that, I knew nothing.  I heard Rush's version "So Many Roads, So Many Trains" from the Chess Box Set, and that song alone made enough of an impression I went looking for more.  I still can't explain the power of the hold his music has on me, but I had a dream about him a few years ago.  Some music is banal enough to induce sleep.  Rush's music is powerful enough to stir me from sleep.