Taylor at the top of his form on 'Contraband' 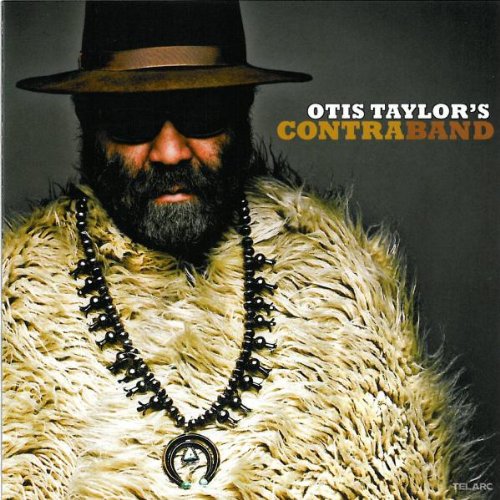 In the Ray Charles biopic Ray, Jamie Foxx's Ray Charles character says the reason people love country music is because it has great stories. That ritual of great storytelling is at the heart of so many traditional musics, a way of retelling the history of a people before easily reproducible written copies was accessible to the masses.

Great storytelling has been downplayed in contemporary blues and other components are accentuated, some good and others less, but it's one of the characteristics that makes Otis Taylor's music feel traditional even as he builds his sound using instruments not often associated with the idiom.

Contraband takes its title from the term used for escaped slaves who were held in camps by union soldiers, where they were treated no better -- and sometimes worse -- than they were on the plantations and farms they fled. It's stories like these Taylor weaves into his hypnotic brand of blues.

"Contraband Blues" rocks harder than just about anything Taylor has ever played, although this is no blues rocker. There's an edge to the twin guitars of Taylor and Jon Paul Johnson and Anne Harris' fiddle adds a ghostly, spiritual presence. He also considers what the world might have been like today if the Roman Empire had never fallen. It's not the type of song crowds are likely to sing along to in concert but Taylor takes the philosophical ruminations and pairs it with some great lead guitar work from Johnson.

It's not all history and suffering, though. Son House once said there is only one kind of blues and that's between a man and a woman. Taylor tells those stories as well.

"Yell Your Name" and "Look To The Side" tell stories of love's troubles, the former being about a man who realizes he wants the love that's left to return, the latter about the way love can conquer oceans and time. "2 or 3 Times" even finds him telling the story of the male ego when it comes to sexual prowess.

Contraband is a record that opens many doors and reveals the versatility of the blues and what it can be and still do. Taylor is a modern day troubadour and his lessons are invaluable, delivered with an outstanding capacity to play and expand the lyrical and musical language of the blues. His road is the one less traveled but it's his skill and commitment that make all the difference.