It's been a very long time since I've been surprised and thrilled by a piece of music... 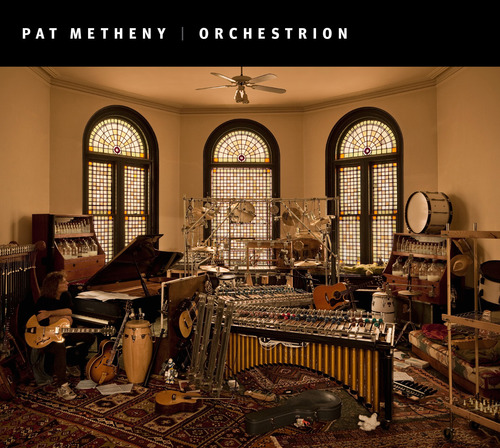 Because I can. Sometimes the only reason to do something is to prove that we can. I'm not a scientist or a philosopher, but I believe it is hardwired into our humanity to push every limit just as far as it will go and then to push it some more. These voyages have taken us to all manner of unexpected places, bringing miraculous good to the masses and pushing us to the brink of our own destruction. Sometimes these voyages took us no further than the distance between where the voyage began and where it ended, the journey being more important than the destination itself.

Jazz luminary Pat Metheny has eked out a pretty nice career for himself over the past 30 years. I know next to nothing about jazz, and I know the name Pat Metheny. He's revered as one of the finest jazz guitarists of his era. What I'm saying is, nobody would have minded if he decided to keep knocking out jazz records at his established pace and within whatever confines he has constructed for himself over a lifetime. I don't know a lot about him, but after buying and listening to my first Pat Metheny record, I'm pretty sure this is a guy for whom standing still is not an option.

Orchestrion is the realization of a lifelong dream for Metheny, or at least an experiment with a lifelong fascination. As a child, he was fascinated by the player piano in his grandfather's basement. Some decades later, Metheny and a talented group of engineers have fashioned something of an entire band of player instruments, ranging from tuned bottles that create different pitches when air is blown through them to traditional drums and cymbals and everything else in between.

Sure, he could have gotten some Mac Pros and done this with computers. He could have even (gasp) hired some musicians to come in and play the parts he'd written for the various instruments. He didn't do that because simply making a record and taking a series of notes on a page and bringing life to them wasn't (entirely) the point of this project. He wanted to see if he could build his own orchestra of instruments capable of playing on their own. It wasn't until he discovered he could that he asked the next question: what the hell do I do with it?

Orhestrion would be significant even if the results of this record were nothing more than scientific proof that we can create an orchestra of organic, acoustic instruments capable of playing themselves without direct human contact. Yes, well done. Cheers. If that's all that resulted, we'd give him a firm handshake and set the CD on our shelf and marvel at what he had done every time our eyes glanced at the spine and passed it over in search of music we actually wanted to hear. That's what makes Orchestrion special. In addition to being a stunning achievement of imagination and ingenuity and engineering, this is music we'll want to hear.

SomethingElse writer Mark Saleski describes Pat Metheny's approach to melody as long-form melody. He's right about that. Where standard rock and blues conventions will present a melody in only a few bars taking only a few seconds, he will explore his melodic idea over a period of minutes before finally presenting it as a whole. On the title track in particular, the melody feels like a question he's asking. He asks it different ways and with different instruments and he beautifully brings the question to rest at the end of the 16-minute conversation. Did he answer the question or just run out of ways to ask it?  You have to keep listening to make that judgment, and that, my friends, is genius.

It's been a very long time since I've been surprised and thrilled by a piece of music the way "Orchestrion" has surprised and thrilled me. The rest of the album is indeed brilliant and worthy of repeated listens, but the title track may go down as the most wondrous song I'll hear this year. I'll hear no shortage of wonderful records this year, and I'll respond to every one of them, but I don't think I'll respond this way to any of them because I've never responded this way to anything I've heard before.