Review: Paul McCarntey - Chaos And Creation In The Backyard 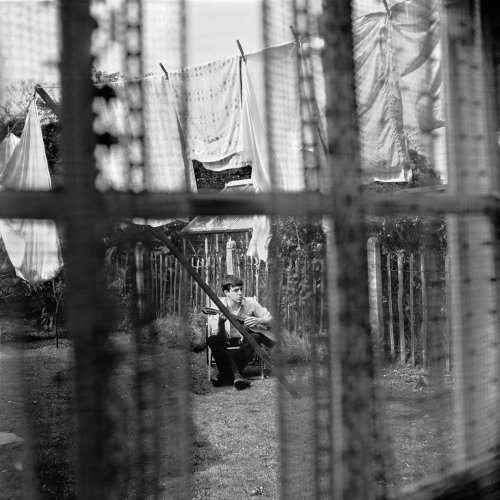 I may be giving Radiohead producer Nigel Godrich too much credit but the presence of only one annoying, cheeky song on a McCartney solo record is nothing short of amazing. The word here is lean. There are no futile attempts at grand statement ("Freedom"). He resists the temptation to show us all how hard he is with silly bravado or posturing. Even the silly love songs are mostly absent.

The album opens with "Fine Line" which also happens to be the song from his Grammy performance that cost me 10 dollars. I called the song pedestrian based on that performance. I am now willing to back off that statement… a little.

"Fine Line" is a good example of how Chaos and Creation works. Not much grabs you on first listen. The lyrics are neither embarrassing nor revelatory. The classic rock roots of many of these songs make them unremarkable (or pedestrian). The secrets of these songs are revealed only with repeated listening. Strings do unexpected things and McCartney uses an arsenal of instruments not traditionally used in popular music such as flugelhorn, duduk, autoharp, vibes, harmonium, and glockenspiel. The choice of these unusual instruments bolsters McCartney's gift for melody and gives the songs vitality. He not only chose them but also plays most of them himself.

"Riding to Vanity Fair" might be the coolest thing he has done in 30 years. "Vanity Fair" is the story of a broken friendship. Does "Riding to Vanity Fair" really mean "Writing to Vanity Fair?" Did the relationship in this song end because Sir Paul felt betrayed by a confidant who sold him out to the press? The lyrics are consistent with that interpretation. None of us will know what it is like to live a life where tabloids will pay to know the most mundane and intimate details of our life. "Riding to Vanity Fair" could have easily degenerated into musings from an an ivory tower, a song of self-pity for the wealthy. McCartney avoids that focusing instead on the underlying emotions. The lyrics express feelings of betrayal and sadness. We may never read about our lives on the cover of The National Enquirer but have all experienced the betrayal of having our secrets revealed by someone we trusted. Is "Riding to Vanity Fair" about being betrayed in the press? It does not matter. The emotions of the song will still resonate.

The best part of "Vanity Fair" is the music. The strings arrangement adds just the right touch of melancholy murmuring and droning to create the air of disappointment suggested in the lyrics. Acoustic guitar and Wurlitzer electric piano provide the song's foundation. Glockenspiel accents and occasional electric guitar flourishes are all the adornment "Vanity Fair" needs.

Sir Paul's voice is finally beginning to show its age. The high notes do not come quite as easily. His voice sounds just the slightest bit thinner. "Vanity Fair" actually benefits from this. The straining in his voice adds a sense of plaintiveness that fits comfortably.

"How Kind of You" is another victory. McCartney has written innumerable songs with this kind of saccharine sentiment. In the past, he would have married the sugary words to an equally sugary melody. "How Kind of You" is saved by the use of non-traditional instruments and strings to create a musical backdrop that is almost unsettling. The juxtaposition of the sweet words and the eeriness of the music creates tension and that tension makes the song work.

Not every song on Chaos and Creation is a complex composition like "Riding to Vanity Fair" and "How Kind of You." "Jenny Wren" is a spare, simple acoustic song anchored by a barely audible floor tom keeping time. McCartney manages a surprise even in a sparse song like this. The duduk is not the popular choice of classic rock legends (apparently cowbell is). The duduk, an Armenian instrument with a mournful tone reminiscent of a clarinet or oboe, has a slightly unusual sound and is a great choice.

Noel Gallagher, if nothing else a pretty fair Beatles historian, sums up the lone dud on Chaos and Creation: "'English Tea' is atrocious and he does it to you every time." Gallagher is right, of course. The song is bad enough in its own rite but the sequencing of the album, putting "English Tea" in the middle of the album, destroys the flow of the record. McCartney cannot help but embarrassing himself at least once on a record. Chaos and Creation would have been an even twelve songs without "English Tea" and losing those two terrible minutes would have made the remaining 44 minutes that much better.

Chaos and Creation in the Backyard set me back ten dollars but it cost me more than that. Now I have to find a fill-in for all of my jokes about veteran artists embarrassing themselves in their old age. This album removes Sir Paul from that list. Like Dylan before him, McCartney is enjoying a renaissance in his work. I will have to kick around Eric Clapton instead. Chaos and Creation is a sturdy set of songs with a couple of gems. It is free from the filler that has weakened his past albums ("English Tea" does not even rise to the level of filler). His Grammy nominations were more than just an overdue homage. They were deserved.

I will have to limit my McCartney jokes to "Freedom," which is still one of the worst songs of the past fifty years, and the abomination of him performing "Yesterday" with Jay-Z and Linkin Park.