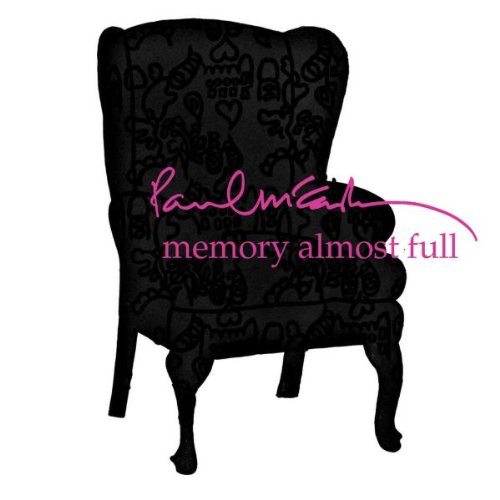 Memory Almost Full, the title of Paul McCartney's new album, is a good summation for the music presented on the record.  This is an album of compact, ornate sketches detailed with a full palette of standard and unusual instruments.  Most of the songs on MAF settle on a single pattern or idea and explore it quickly; only two of the 13 tracks extend beyond the four-minute mark.  Where his previous album, Chaos and Creation in the Backyard had a grander, more sweeping feel to it, MAF has a comparatively simpler and sunnier feel.

The most interesting thing about the album's opener, “Dance Tonight,” is its use of the mandolin as the primary instrument, a pop music rarity.  Outside of that, “Dance Tonight” establishes the template for most of the songs that follow it: a compact song, a single idea, a pleasant melody, an underdeveloped chorus.  When McCartney's voice is steady and the melody is pleasant, as is the case on “Dance Tonight” and the following track, “Ever Present Past,” the song works.  When his voice or melody fail, there aren't creative arrangements, catchy choruses, or deep lyrical insights to rescue the song.

“Ever Present Past” is a well-constructed song.  The lyrics reference the breakneck speed of the modern world, and the song’s quick tempo reflects this theme.  Preparing for the release of the record, he said he’s ready for the scrutiny of his lyrics.  He also says he was in a reflective mood making this record, an album he actually started writing prior to working on Chaos.  That sense of reflection is evident in these lyrics, but the character in this song sees time as having gone by so fast you wonder what impact the reflection has had on him.  This is a sunny pop song that recalls “Silly Love Songs” but is not a knockoff of that hit single.

“House of Wax” and “Mr. Bellamy” are two of the more interesting compositions on the record.  "Mr.  Bellamy" has a symphonic opening that gives way to a broken, single-note piano intro.  McCartney's voice strains to reach for the higher register – a recurring problem on Memory but this is one of the finer pieces of music on the record.  "House of Wax" sports a soaring guitar solo and a dramatic arrangement.  At nearly five minutes, it is the longest song on the record and the extended length is justified by the quality of the ideas it explores.

"You Tell Me" is the best example of a song where McCartney's voice is unable to reach its destination.  The thinness of his voice in these moments is not pleasing to the ear and it is a shame because he has always been a fabulous singer.  At 64, he still possesses a terrific voice but no longer has command of his higher register.

Memory Almost Full is a satisfying listen.  Anyone looking for clues into McCartney's mental state during a time of personal turmoil will be disappointed because it takes some real bootstrapping to extrapolate these lyrics into angst-ridden statements about the demise of his marriage.  When this album works, and it often does, it plays to McCartney's strengths of melody and musicianship.  It gets lost in all the Lennon worship – not unjustified, mind you – that McCartney was the superior instrumentalist and is a marvelous vocalist.  Even as some of his voice begins to desert him, he can still do more with it than most can at their prime and it's almost always pleasant and warm.  Memory Almost Full is a minor work in his catalog, but a worthwhile one.