Review: Paul Simon - So Beautiful Or So What

Is love an accident? Who believes in angels? Paul Simon has questions. Does he have answers? 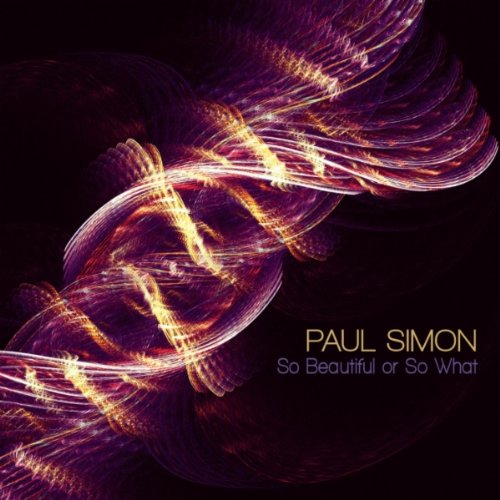 The songs of Paul Simon's So Beautiful Or So What have a tender, gentle spirit filled with bittersweet ruminations of hope from a disappointed optimist. The titles give that away: Questions For The Angels," "Love is Eternal Sacred Light," "The Afterlife," "Love And Blessings," and "Love And Hard Times." What happens when we die? What does it mean for us in the here and now?

Simon considers these questions and the nature of love and happiness. At times the answers seem within his grasp but slip through his fingers as fast as they came. When he first asks "Who believes in angels?" he answers only fools and pilgrims do. When he asks a second time, he includes himself (or at least the song's narrator).

The wry conflict between Father and Son in "Love And Hard Times" paints a picture of a divide between the two where humanity is concerned. Whether or not that is true, it also reflects how difficult it is for people to relate to God in the context of their own struggles as well as how we relate to each other. We see the best and worst in people every single day. Is there anything left to believe in, now or then? Does God love us? Should he? What do we think of Him?

"The Afterlife" is written from the perspective of someone who believes God is waiting on the other side, and that sometimes we find ourselves waiting on God. The uncertainty of the road from here to there is the heart of the song. He cleverly uses that image to set a scene and paint a picture of that journey that is simultaneously playful and biting. That's an important note, the playfulness. While the subject matter is often serious, Simon presents it delicately and often with a pinch of humor.

He ends the album with the title track and tells us and his children "life is what we make of it / so beautiful or so what." It's as though after asking these questions reaching for God, he's given up on the search or made peace with the conflicts and mysteries of the divine. Which is it? He doesn't give us an easy answer because there isn't one and probably because it's a bit of both.

This isn't a concept album in the '70s prog-rock sense with plot, characters, and narrative but these songs of materialism, politics, spirit, faith, future, and past feel connected and dependent on one another. Listen to them straight through or on shuffle and they all make sense because this is an album without a beginning or end, but something is lost if you don't give them a chance to be heard in context. When taken as a whole, Simon seems to be saying, "Maybe we'll be all right?" It's a timeless sentiment that feels more prescient in the here and now than any moment in my lifetime.

The music is often hushed and brushed; the elements of Africa and South America that infiltrated his records in the '80s can be felt more than heard. They feel decorative rather than being focal points as they might have been in the past.

So many records, so little time. I don't have the hours in the day to spend as much time obsessively listening to every great record and artist, but I've pledged my life to getting as far as I can before I make my departure. So Beautiful Or So What has made that list just a little longer.