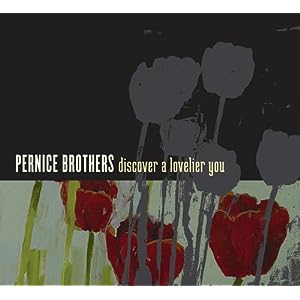 I try to pretend like I am not an elitist prick where music is concerned. Don’t believe it. I am. And I have enjoyed the hell out of being in on one of music’s best-kept secrets: Joe Pernice. He has recorded under at least 231 monikers during his career. He has made incredible records under each of them. I have listened to all of them while the rest of the poor masses have been served teeming piles of Destiny’s Child and the godawful Rob Thomas. The sun shines on a dog’s ass somedays.

And make no mistake… it is sunshine shining on my big ass. Joe Pernice writes and records perfect, sunny pop records. At least that is what you think until you read the lyrics. Then you find out things are not quite so sunny in Camp Pernice. Then you play the CD again and your head feels like it is being sucked in by a straw because no one should make pessimism and depression sound that damn good (perhaps only the late Elliott Smith surpasses him in this department).

Why the long preamble?  Because it is entertaining me. And because I want it known that I drank the Pernice Kool-Aid in 1999 when I first heard his Chappaquiddick Skyline album. The first line of on that album: “I hate my life."  That will get your attention. It got mine and I was hooked. How is it possible to sing that line and sound that good?  The Joe Pernice Paradox: he makes torment seem kind of inviting. No, you probably would not want to go out of your way to find it but if it happens to find you… how bad can it be?  Every Pernice-related album I have ever bought has an amazing first song. Each album has been a love at first listen affair.

Until this one. I had to work to like this one a bit. I did not dislike the album after the first listen. I just did not have the same euphoria and “straw sensation” I usually get after listening to new Pernice music. I now thank my lucky stars I had the good sense not to try and write a review after listening to the album that first time.

The album opens with “There Goes the Sun."  What is it with artists opening their albums with songs that have the word ‘sun’ in the title (Oasis’ incredible new album opens with the killer cut “Turn Up the Sun”)?  I did like this one the first time I heard it but… well, I was pissed off at The Killers. Pernice has always had a healthy respect for new wave (you must hear the great cover of the New Order song “Leave Me Alone” on the Chappaquiddick Skyline CD) but he has kept that pretty well in check (or at least he kept it in check enough not to annoy me with it). I seriously doubt the success of The Killers inspired Pernice to unleash his new wave fetish on this record but I am going to blame them anyway because I am the one man in America who still hates them and refuses to buy that record. After listening to the song a few more times it grew on me. There are other places where new wave rears its ugly head but I now like those, too (the thumping bassline on “Say Goodnight to the Lady”, for example).

My favorite song on the album has changed after listening to this many times. This is a good sign. It means there is enough quality to keep things interesting. “Amazing Glow” currently holds the title. “My So-Called Celibate Life” has held the title before and is sure to hold it again. That song ministers to me and I have a feeling it would minister to some of you would-be writers. No, I am not calling us all a sexless bunch (there are a few of you I wonder about though and that certainly described me during most of my single years). Here is the opening line to the song. You decide:

In each life a quiet Hell,
Half a million scripts you can never sell

Tell me that does not minister to you. Go ahead. Try.

Comparing Discover a Lovelier You to any of Joe’s other albums amounts to a distinction without a difference. He is just that good and has proved to be that consistent. I am going to compare it just a bit anyway. Yours, Mine & Ours (the studio album that preceded this one) is still my favorite Pernice disc (regardless of moniker). Some reviewers and fans were (apparently) not nearly as wild about Y,M&O. How this can be, I just do not understand. That having been said… if you were one of the heathens who were not delighted by Y,M&O, this might be your record. And if this is the first time you have ever heard the name Joe Pernice… you’re welcome. Go buy Yours, Mine & Ours and then… and then… and then go out and buy all the rest of his albums. Including this one.