A compelling backstory gives birth to one of the year's best albums... 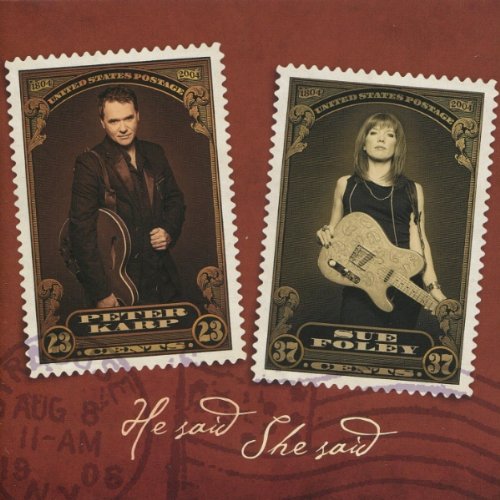 I wasn't the first person to know about Peter Karp and Sue Foley's He Said She Said project but I was privy to the possibility before many when he mentioned it during our interview about its predecessor, his stunning solo album Shadows And Cracks. That was at the end of 2007. After a two-year gestation period, He Said She Said was released in March of this year and Karp and Foley have been out on the road promoting it.

To discuss the album without mentioning the story behind it would be lunacy but it's  too easy to get distracted by it and what it means or might mean. The story is interesting enough but means little if the music sucks.

So what is that story? The album was born out of a series of letters between the two artists while on the road about the toll the road took on them, their families, homes, and hearts. As the two exchanged these letters they became increasingly personal and revealing. Those letters form basis of the songs of He Said She Said.

The concept of a "He said / She said" record has been tried before and to mixed results. The idea is good and that's a great place to start but none of that much matters if the duo can't make it work. A He and She could be lamenting a relationship that didn't work or chronicling the start of something special or the ups-and-downs in between that lead to exciting and frightening places but there are tens of thousands of forgettable odes to love and its impacts. The concept is sound and the backstory intriguing but it takes more than that for success. Do Karp and Foley bring anything to the idea? Do they make it believable? Do they make it interesting? Does the album work independent of the underlying concept?

I use the word concept and while a blues concept album might be fun, HSSS isn't a concept album in a contrived, '70s prog-rock sense. There are no characters or plotlines nor is there a chronological or specific narrative, but there is an inescapable sense of connection among these songs. They flow into and out of each other despite changes in tempo, mood, vocalist, musical styles, and arrangement. Karp and Foley split writing duties throughout and the results are at times meditative, nocturnal, gritty, sensuous, thoughtful, and confessional. It's not surprising there is a singer/songwriter aesthetic to the record, particularly from Karp as he is an extraordinary lyricist and craftsman, but they break that up by relying on their blues and roots backgrounds, giving both acoustic and electric blues flourishes to the record. They also mix in brief bursts of Southwestern flavor and a smattering of horns here and there to help the songs sonically stand apart while still feeling linked to one another. The words and music are appealing in their own right but it's the honesty in the execution and expression that makes this compelling.

That sense of flow and cohesion makes it difficult — but not impossible — to highlight the individual tracks as standout moments. The two aren't nearly as playful throughout the rest of the album as they are on the opening "Treat me Right" but the chemistry between the two and some nice slide guitar work lays foundation for what is to come. Fans of Karp's Shadows And Cracks will find familiarity in "Wait," which is the kind of song that plays to his strengths as a lyricist. Karp finds a way to explore the anxiety, frustration, and resignation that comes from being in a situation beyond one's control, forced to allow events to unfold in their own time with the wait itself being the thing more than what's being waited on. His everyman delivery and the contrasting imagery makes it easy for listeners to find themselves in that familiar territory. As good as his songwriting is — on this and his previous efforts — that delivery is a powerful component of what makes his songs work. His vocal style doesn't know you over with raw intensity but posseses a charisma and charm that exudes warmth and authenticity. Listen to him on "Wait" and then try songs like "Ready For Your Love" and "Regret" and experience the vulnerability and intensity of the moment.

Foley has some of those same characteristics in her writing and voice and that's a crucial element to the chemistry at work. "Danger Lurks" isn't a direct answer to "Wait" but there is a connection. She sounds detached and invested in the song. Does she really believe she shouldn't be letting herself get too close or is she trying to convince herself? She admits to the danger and tells herself she's doomed if she gives in while ending the song admitting it's too late now. She plays a similar role on "Scared." Her voice and the beautiful horn accents tell us it is true that she is but her words tell us there is more.

Records like this are rare in this day of record company obstructionism and myopia and that, paired with my unabashed admiration for Karp and now Foley, makes me so happy to report the album works beautifully and it is finding an audience on blues radio stations around the world. I'm also a bit surprised as this is an album that sheds many of the obvious trappings of the blues idiom. Blues fans are buying in and music fans who don't consider themselves blues fans but appreciate literate, honest songwriting presented in organic packaging owe it to themselves to give this album a chance. Daring radio programmers in country and adult demographics should give their audiences that same opportunity.